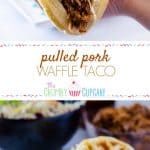 Watch your back, tortillas – stuffed with slow cooked BBQ pulled pork and pineapple coleslaw, these Pulled Pork Waffle Tacos are coming to take Tuesdays away from you!

In the Waffle vs. Pancake debate, I’m a French Toast supporter all the way. I just can’t help but love those thick slices of eggy, cinnamon-kissed bread, doused in maple syrup.

But waffles are definitely an incredibly close second.

It must be those amazing little grooves that hold all that extra maple goodness. Or whatever it is you happen to be drizzlin’ on top.

Brunch doesn’t always have to be about the breakfasty side of things. I may be more inclined to lean that way, myself, but some days, you just need a waffle piled high with the most savory meat you can find.

Which is something you just can’t do to pancakes.

Could you imagine trying to turn a pancake into a taco? That tender disc would rip right in half.

I was totally afraid that was exactly what would happen with these waffles, to be honest.

After having no success finding a waffle maker that wasn’t of the Belgian variety (the kind that conveniently  sections it off into 4 pieces,) or square (but that wasn’t gonna do it, obvs,) I knew I was just going to have to go for it and hope for the best.

Thank goodness for the chewy waffle.

Personally, I normally prefer my waffles crispy, but for these tacos to work, you’ve got to resist the urge to brown them up too much.

They need some flexibility to hold all that filling and not split into a sandwich (of course, if that’s what you’re going for, there’s a handful in the list below my recipe for your drooling pleasure!)

Oh, did I forget to mention that? Yeah, my pork brine (as well as my BBQ sauce) included a full bottle of Not Your Father’s Root Beer. I debated between using that or a stout, but I felt like the pork needed something a bit sweeter than my usual go-to cookin’ beer, and that fit the bill.

It was, however, my second time eating a waffle taco.

This tasty recipe was inspired by one I tried at Disney World many moons ago.

They had a sweet & spicy waffle sandwich (folded in half) on the menu at a quick service restaurant, and Mr. Crumby and I kind of fell in love with it.

To be different, I settled on pulled pork covered in pineapple coleslaw. BBQ and pineapple are such an amazing combination, I couldn’t resist trying them in this unique brunch entrée. 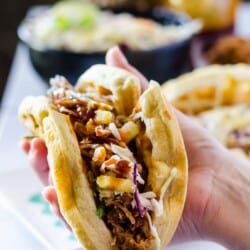