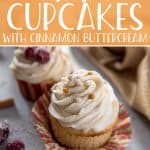 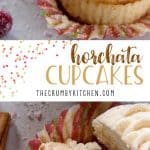 These fluffy Horchata Cupcakes, flecked with vanilla bean, are filled and topped with a boozy whiskey buttercream that’s sure to please all the cinnamon lovers in your life!

You guys know how much I love to bake with booze, right?

It’s not a secret that any time I can jam some liquor or wine into a recipe, you can bet I will. Sometimes, it’s just my OCD requiring me to not waste those last few glugs of champagne from three days ago. Or using up half a beer that Abe fell asleep before finishing the night before.

Or trying desperately to empty the giant bottle of cheap rum that’s been clogging up my liquor cabinet for the last two years.

In the case of these Horchata Cupcakes…I just really wanted to make them. I even bought a fresh bottle.

There are so many pros to making these horchata cupcakes!

First of all, versatility. Holy moly. So, Christmas is in less than two weeks – and these are perfect for the dessert table, no?

BUT say you’re reading this after Christmas? Or in April? October?

They’ll be fabulous any time of the year. Hello? Horchata has no season. You could make them on any given Taco Tuesday and thrill the hell out of your spouse or neighbor or grandpa because cupcakes.

Cupcakes are always welcome. Switch up the sprinkles, or leave them off completely, and you’ve got an evergreen treat in your back baking pocket.

The cupcakes themselves are pretty standard, and might even become a go-to for you – if you’re into the not-so-sweet kind. They almost bake up tasting like a soft, fluffy vanilla muffin, making them the perfect vehicle for the sugary cinnamon buttercream.

Protip: When baking your horchata cupcakes, be sure to put them in a 400-degree (Fahrenheit) oven for 5 minutes, then drop the temp to 350 for another 10 or 12 minutes. You’ll end up with beautifully domed little cakes that you’ll almost feel bad about covering in frosting.

I wish I’d taken a picture of these un-iced so you could see just how perfectly domed they were. I was patting myself on the back. (Actually, you can kind of see them – I made these horchata cupcakes on Facebook Live! Part 1 – Part 2)

Of course, I used RumChata in my horchata cupcake batter, but if you want to use the actual non-alcoholic horchata instead, you’re more than welcome. The alcohol bakes out of them, and you’re left with a slight cinnamon/rum flavor.

As for the cinnamon buttercream – if you leave the booze out, you’re making churro cupcakes. Just a heads up. The buttercream is what brings these horchata cupcakes to life y’all!

You know what would be a super cute way to serve these at a party?

I see your New Year’s Eve coming together already.

Try one of these other holiday-friendly recipes using horchata, rum, and Fireball! 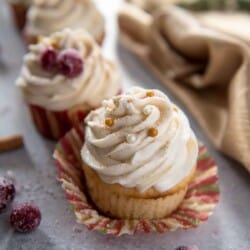