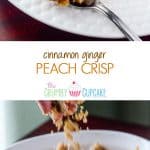 This Cinnamon Ginger Peach Crisp is a spicy, playful nod to fall, using one of summer’s favorite fruits marinated in cinnamon whiskey and fresh ginger! I’m getting real tired of you, summertime.

It’s one thing when you make me sweat in your 95+ degree heat, and slap me in the face with your wet towel of humidity every day.

But these $200 electric bills are getting ridiculous.

Of course, Mr. Crumby requiring a “perfect” 74 degrees in the house at all times doesn’t help; meanwhile, I’m wrapping my fleece PJ-clad self in two blankets so I don’t freeze to death. Not to mention, we desperately need a new roof and new windows on our 30-plus-year-old house, which would help the bill come down quite a bit.

I guess in the meantime, a big helping of this crunchy, warm, slightly boozy Cinnamon Ginger Peach Crisp will help take my mind off the ironic, artificial Arctic tundra I live in. Georgia Peaches are, by far, my favorite summer fruit. Admittedly, I often opt for nectarines, since the fuzzy exterior weirds me out a little, but the sweet, juicy insides are totally worth my tiny textural issue.

Especially when I take them out of their season and doll them up in fall flavors – toasted pecans, fresh ginger, brown butter, and cinnamon whiskey.

Fall come early here in my south, y’all. I don’t care how hot it is outside. Even with the warm, homey fall flavors running through this dessert, it’s still very much August-appropriate. The whiskey cooks down to add a nice cinnamon hum to the juicy peaches, with just a hint of southern charm left on your taste buds.

And there is lots of brown butter in that there crumble topping, and that’s embraceable no matter what season we’re in. A cobbler, a crumble, a crisp – they’re not complete without a big scoop (or two) of cold, creamy vanilla ice cream, and this one is no exception. Serve it warm, and let the ice cream melt a bit before you devour it, and I promise, you will be forever changed.

This peaches and cream is pure summer lovin’, so turn down that AC, fire up your oven, and get one going for dessert tonight.

I’m serious, get on it…it’s gonna be nothing but pumpkins and nutmeg around here pretty soon! 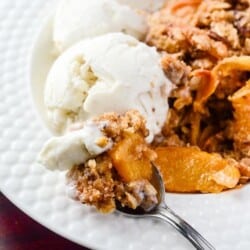 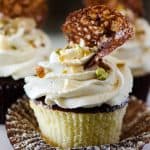 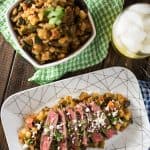 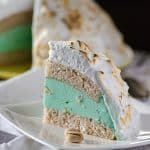