Fresh bananas, chocolate graham cracker crust, and a hazelnut filling make this Nutella Banana Cream Pie one to dream about! I am one of the many people in the world obsessed over Nutella.

I admit it. I love dipping my apples in it; that’s probably my favorite easy snack. But when I get one of the (many) chocolate cravings I suffer (ha) from (haha), and have no apples in the house, I like to sneak to the pantry, grab the Nutella and a spoon, and go to town on the jar.

I have no shame. Remember, not too long ago, when Ferrero used to say Nutella was healthy for you? All those wholesome commercials with kids and their Nutella toast for breakfast, and then the world wisened up.

Just when we thought something so damn delicious was actually not terrible for you. We should have known better.

But you know what is healthy for you? Bananas!

Unfortunately, I took the healthy part away when I put them in this indulgent Banana Cream Pie. This pie was born last Saturday, at my best friend’s house.

Mr. Crumby and I made plans to spend the afternoon with her and her SO enjoying the terribly hot Florida weather by the pool with some wine and dessert. That morning, I was terribly motivated to bake something (because pretty much any time I cook or bake, it’s possible blog fodder!), but by the time we’d eaten breakfast and washed up, I was sitting on the couch like a slug, too lazy to do anything but snuggle the Hubs, pet the pooch and enjoy some bad TV.

But, I’d made a promise to bring something sweet to pair with our lunch of Apothic, Sangue di Giuda, and Moscato, and I just couldn’t let my bestie down.

In my semi-lethargic daze, between commercials, I browsed through my Pinterest boards blindly, looking for inspiration. Cupcakes? Nah, too typical for me. It was too late to make and ice a cake for it to be ready in time. Didn’t feel like cookies.

Oooh. Lightbulb. I had just bought a jumbo-sized jar of Nutella. Pushing all lazy thoughts of just taking the jar and four spoons to her house, I edited my search. Lo and behold, I found Nutella dip! Dozens of different recipes, all working toward the same happy goal.

Now…which one to make?

After a lot of deliberation, and annoyance that I didn’t have any CoolWhip in the fridge (LazyMonster no wanna whip cream!), I decided on one similar to a pumpkin dip I’d made before, from Cooking Classy. A cream cheese-based one, with lots of Nutella, and whipped cream to boot.

Fast-forwarding. We polished off the entire bowl, dipping everything from strawberries to apples to our fingers in it. And at one point, I had an epiphany (with the help of my bestie). Annoyed that I couldn’t dip a banana slice in it without it breaking, I first dipped a chocolate graham cracker, then topped it with the banana slice… I lightened up the filling a little more of course, and turned it into a fluffy, creamy vessel for my banana slices…

Nestled it all in a crunchy chocolate graham cracker crust, and topped it with an extra Nutella drizzle and some yummy vanilla whipped cream…

This pie is to die for.

I can’t wait to make it again, so I can see what else I can put in it to make it even better. Strawberries? Coconut? Mini chocolate chips?

The possibilities are practically endless. 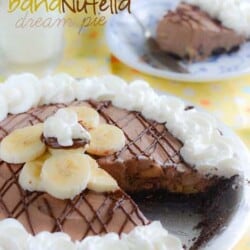 Don’t worry. I won’t judge you if you lick the screen.