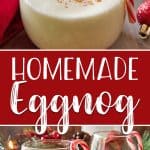 The store-bought stuff simply can’t compete with a batch of this deliciously EASY Homemade Eggnog! Thick, creamy, and comforting, this eggnog recipe is perfect for spiking with your favorite liquor on those cold winter nights! 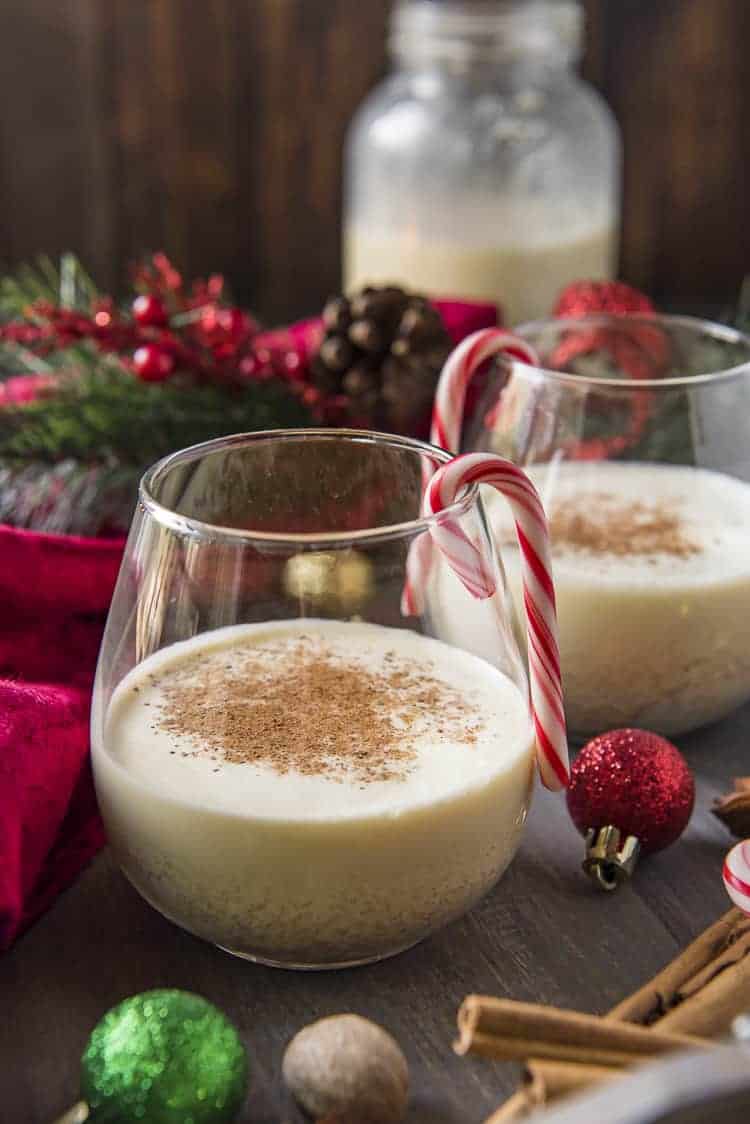 Who’s ready for cozy nights by the fire with a mug of boozy nog?!

I would take any night by a fire, but this old Florida house I live it sadly makes that pretty tough.

Next time you snuggle up next to some crackling flames, send out some good vibes for me, will ya? Especially if you’re sipping on this homemade eggnog!

JUST TAKE ME TO THE HOMEMADE EGGNOG ALREADY!

If you’d rather skip my (pretty darn helpful) tips and tricks, essential cooking info, and similar recipe ideas – and get straight to this deliciously easy eggnog recipe recipe, just scroll right on down to the bottom of the page where you can find the printable recipe card! 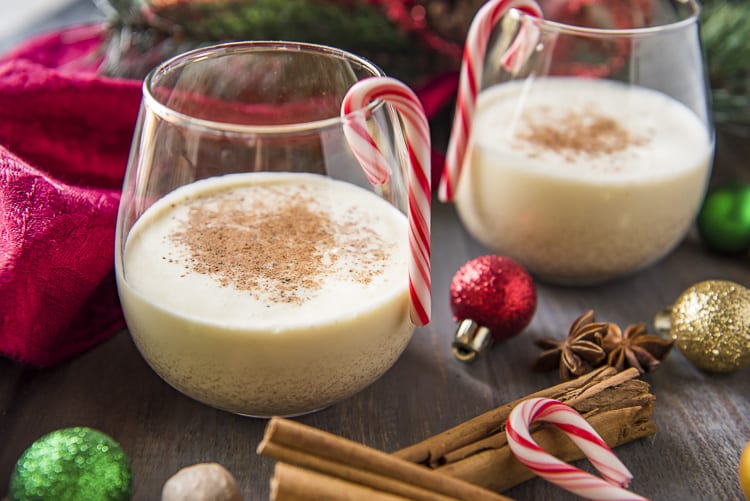 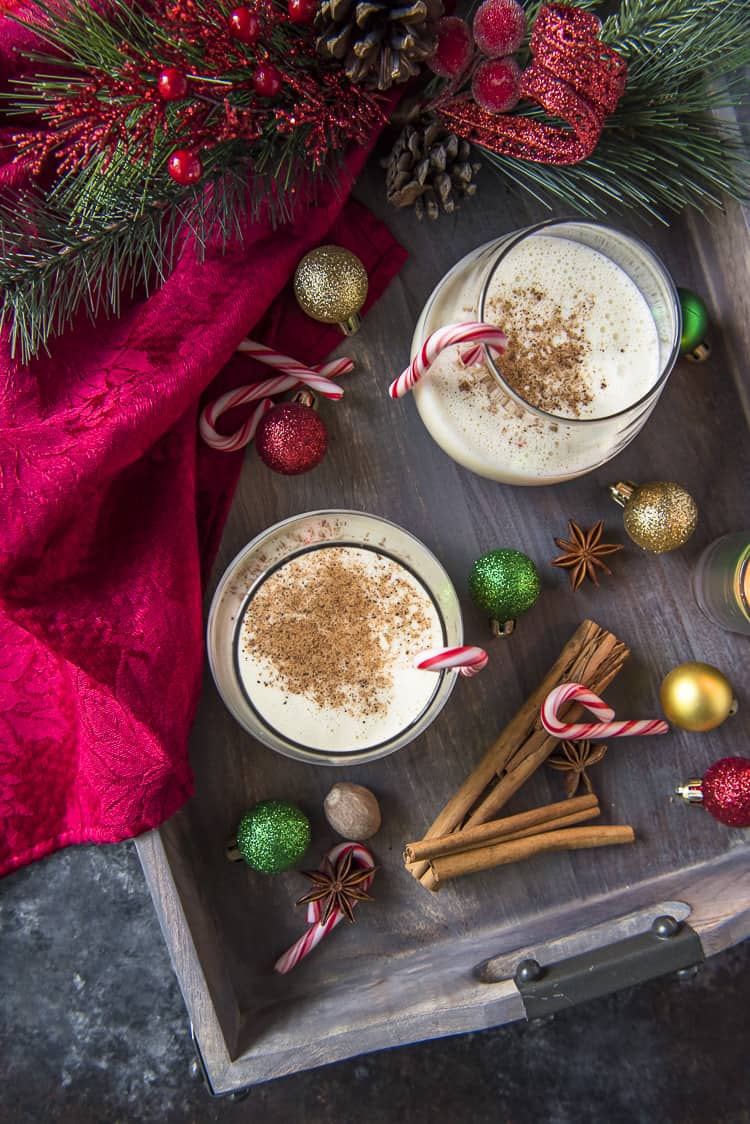 I lived a pretty sheltered foodie life as a child.

As sure as I am that I’ve already mentioned this, I feel like it needs reiterating when it comes to eggnog.

This was most definitely not a part of my childhood. Sure, my Papa shared his buttermilk with me, but eggnog? Absolutely never a whiff of the stuff in our house.

It wasn’t until a few Christmases ago where it was all but forced on me that I came around.

I’ll try anything once, and while I prefer my hubby’s Coquito, I won’t refuse a nice boozy glass of eggnog!

Especially if it’s made at home without any gelatins or preservatives. 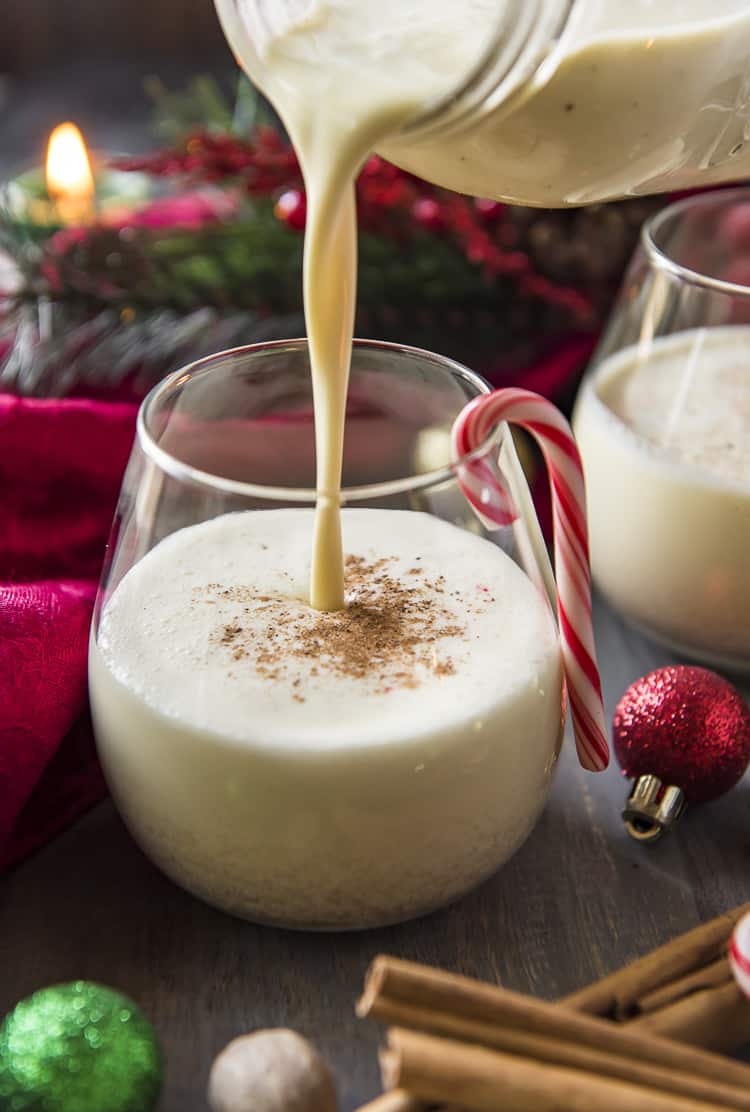 Eggnog is a sweet, rich, dairy-based drink made with cream, milk, sugar, egg yolks, spices and flavorings. Also known as ‘milk punch’, it is often aged or spiked with liquor such as rum, brandy, or bourbon.

Popular in the United States, Canada, and Australia, it is traditionally enjoyed during the Christmas season. It can be served chilled or warm, and is delicious mixed with other drinks like coffee or milkshakes.

Eggnog is believed to have originated in medieval Britain from a drink called posset. Posset, milk curdled with wine or ale and spiced, was used as a cold remedy

How Long Will Homemade Eggnog Last?

The storage time for homemade eggnog varies depending on the amount of alcohol (or lack thereof) used. The more liquor you add, the longer your eggnog will last, and the smoother the flavors will be.

More alcohol will also cause extra thickening which can be counteracted when you serve it by adding a bit of milk to thin it out.

Note: if you use a blender to mix raw eggs with your ingredients instead of heat-treating it, eggnog with no liquor must be consumed within 1 day.

What Else Can Eggnog Be Used In?

Eggnog can be used in SO many baked goodies, all equally appropriate for Christmas! 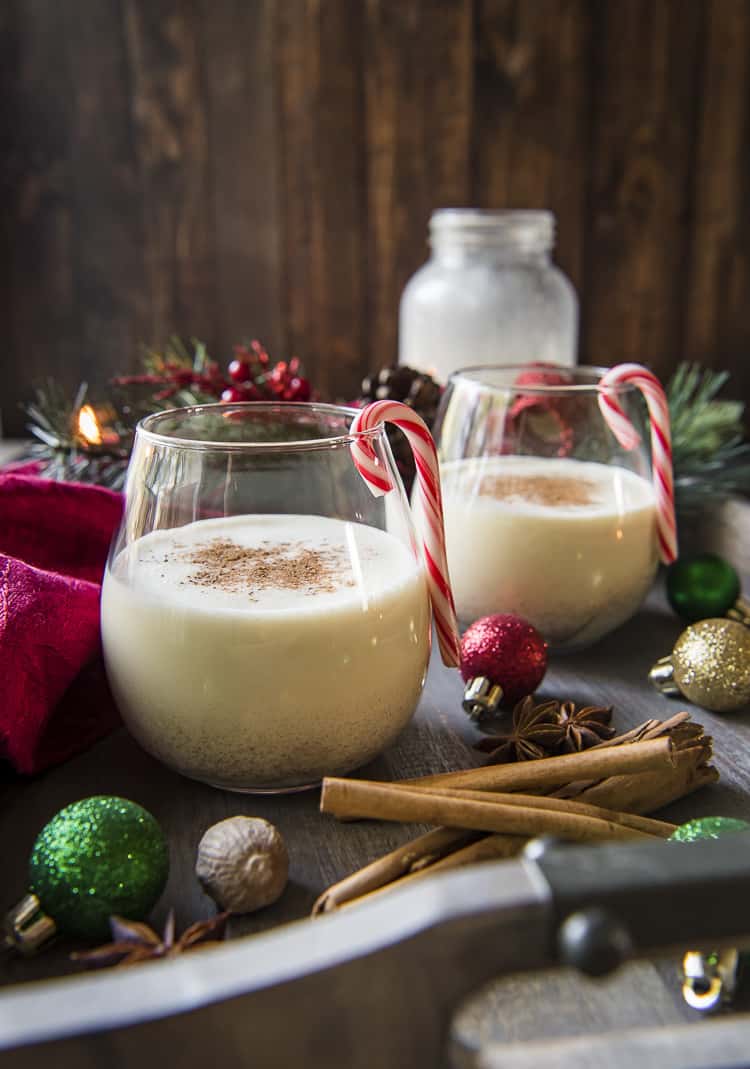 How To Make Homemade Eggnog:

Many recipes for Homemade Eggnog involve simmering milk and cream over heat and tempering it into an egg and sugar mixture.

This practice is the safest way to make eggnog, avoiding any chance of foodborne illness from salmonella.

If you’re planning on consuming this eggnog without alcohol, I recommend that you make it as written in this recipe. Be sure to use the freshest organic eggs you can find.

However, if your intention is making a boozy eggnog that will age in the fridge over time, you can combine everything in your blender instead! The liquor kills bacteria over time, keeping the eggnog safe for consumption. 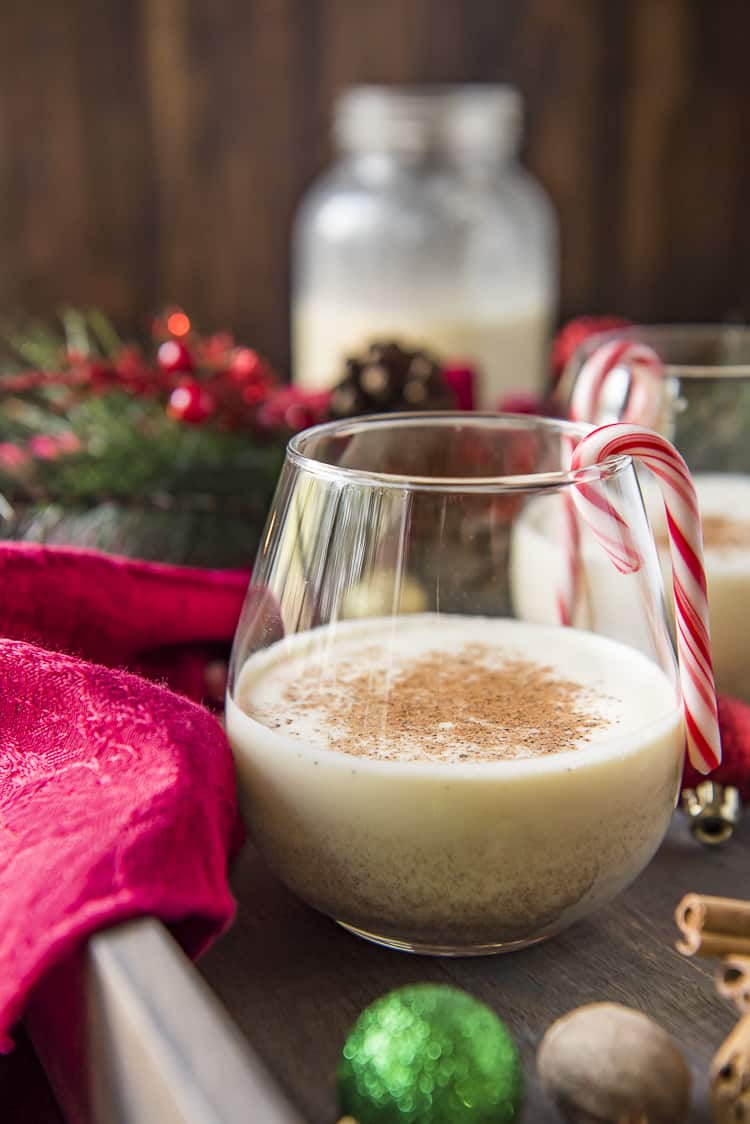 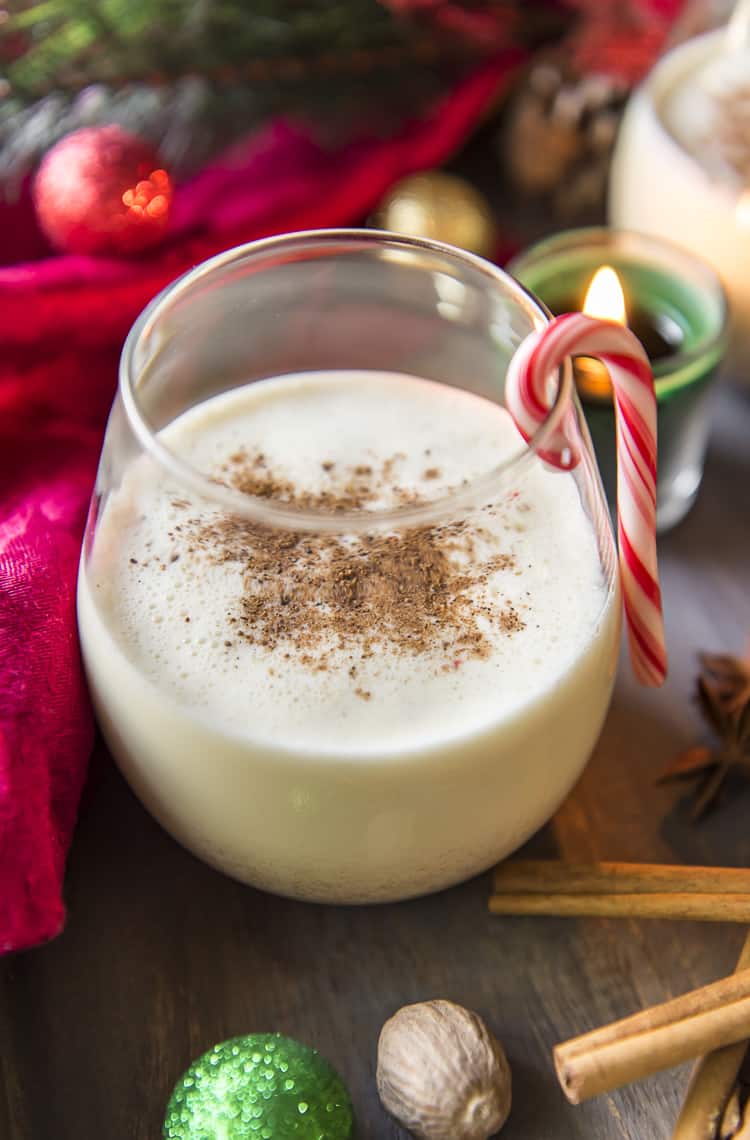 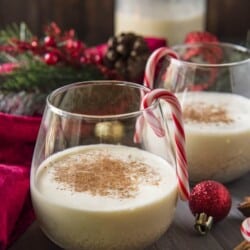 Storage time for homemade eggnog varies depending on the amount of alcohol (or lack thereof) used. This eggnog can also be made in the blender if you pan on aging it with liquor over time. Simply combine all of the ingredients in a blender and pulse until it's completely combined. Store in the fridge and follow the storage guidelines above.

PIN THIS EGGNOG RECIPE FOR LATER!