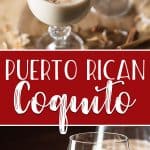 Don’t like eggnog? Give it’s tropical Puerto Rican cousin a try – coconut-based Coquito is rich, creamy, full of rum, and ready for any holiday party!

I am so horrifyingly unprepared for this holiday.

As I write this, know that it is Thursday, December 22, 9:30PM. I have 2 pies and 8 batches of cookies to bake, half of which need garnishing or decorating, before Saturday. There’s a handful of gifts to wrap – in secret, somehow – and stocking stuffers to purchase for my hubby and my pooch.

I have a rib roast to season and Brussels sprouts to prep for Sunday.

Plus there’s the usual household things that have to get done. And two 12+ hour workdays coming at me in a very short time.

To say that I’m freaking out would be an understatement.

BUT: I could absolutely not let you guys go another Christmas without the recipe for Abe’s wonderful coquito.

My intention for this post, before getting sick last week and throwing my whole baking schedule into freefall, was to cleverly rewrite Twas The Night Before Christmas to include a stressed out father enjoying his Coquito after the house is asleep.

I love poetry, and I can’t remember the last time I actually put pen to paper to write one of my own.

Getting the idea for this rewrite got me all shades of excited, and I managed to jot down a couple of stanzas before my brain literally broke.

I couldn’t successfully rhyme while looking at the clock and realizing how screwed I was.

Maybe it’s the Benadryl, but some of the stuff I was writing reminded me of English-dubbed anime.

You know how the literal translations are often so weird? That was me.

So, you’re getting my OMG I’M FREAKING OUT ramblings instead, with an added bonus of some pretty delicious looking pics of my favorite Christmas drink of all time – el coquito!

It’s eggnog for the eggnog haters of the world!

(Of course, if you love eggnog too, feel free to try out my recipe for that as well!)

You’re gonna want to keep a pitcher of this in the fridge even after the holidays – it makes the best coffee creamer ever!

…Just don’t add it to your off-to-work mug.

Coquito is a coconut-based traditional Christmas drink that originated in Puerto Rico, but is found throughout the Carribbean. It is often called Puerto Rican Eggnog due to its similarity to the egg-based holiday drink, but it contains no eggs.

While there are many regional variations, every recipe starts with similar base coquito ingredients. This recipe calls for:

The drink is sweet and strong, often served as a shot after a large dinner.

Does Coquito Have To Be Refrigerated?

Coquito is best served chilled, and must be refrigerated before serving. It is best kept chilled afterwards.

How Long Does Coquito Last In the Fridge?

Properly stored in an airtight container, a batch of Coquito will last between 4 and 6 months.
Meaning you can make it early and really infuse that rum, or enjoy it well past the holidays!

The Best Rum for Coquito?

Honestly, you can really go with your favorite rum here. We make this recipe every year and have used everything from Captain Morgan to Bacardi to Brugal, white rum to spiced rum to añejo. (We are currently partial to Ron Barcelo Añejo Rum!)

How To Make The BEST Puerto Rican Coquito:

Most recipes for Coquito you’ll find have you blending up your ingredients in a blender.

This particular recipe involves a bit of simmering to infuse flavors prior to mixing in the rum. It’s almost like aging rum balls in record time.

However, you can also combine everything in your blender and blitz it up to Coquito goodness if you’re in a time crunch! It will still be delicious! 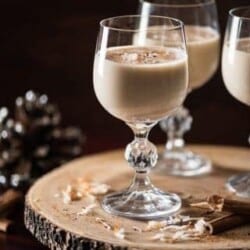