Warning: this dessert will cause uncontrollable urges to cuddle under warm blankets, drink hot cocoa, and/or roast marshmallows over bonfires.

You have been warned.

That said, don’t be afraid to make it! After all, the time for cool weather activities is upon us, and devouring a heaping bowl of this Cranberry Apple Cinnamon Bread Pudding should most certainly be one of those activities! Can we just take a second to talk about how much more exhausting my life has become in the last few months?

And I don’t even have kids yet.

How am I gonna deal when I pop out a needy, crying baby next year?

Between tons of work and this crazy fun blog and keeping up with my top 3 shows (The Walking Dead, The Vampire Diaries & Once Upon a Time) and my surprisingly busy recent social life, I barely have time to do much else.

I mean, I already limit myself to less than 6 hours of sleep most nights. Not by choice, mind you.

Who do I need to petition to get a few more hours added to each day? Some days, I honestly have no idea how I keep myself upright. But I feel as though I should give credit where credit is due.

Every morning like clockwork, either in my Keurig, from Dunkin’ Donuts, or from Starbucks, I must have at least one cup. Good Lord, I don’t know where I’d be without it.

I’m not even sure the caffeine in it does anything at all for me, anymore. At this point, it could be nothing more than a placebo, but it tricks me into thinking I have energy.

Sometimes, those tricks are all my brain needs. It’s funny, because as a kid, I remember Nana drinking coffee all the time, and I wanted nothing to do with it.

(Except for those little creamers your get at most restaurants. I’d drink those straight!)

To me, it was a bitter, foul-smelling beverage that only old people drank, at what seemed like any time of the day.

Well. I guess I’m one of the “old people”, now. But I embrace that fact – so I’m sharing my love of coffee with you guys! Get that crock pot going and make a batch ASAP, then grab a cup of coffee with a little cream, and a spoon, so you can gobble up this bread pudding. They make a great pair!

Mr. Crumby introduced me to bread pudding about 8 years ago, ironically enough, with a store-bought package from the bakery I still work in.

Just by looking at it, I did not expect to like it.

I mean, let’s be honest, bread pudding is probably one of the least attractive desserts.

But when you let day old bread cook with the custard and apples and cinnamon and let the sauce re-hydrate the dried cranberries, and melt some cinnamon chips inside all of it, and then top it off with some of the best salted caramel sauce you’ve ever had?

Pure autumn magic, my friends. Don’t judge a book by its cover! And this one even looks pretty darn good, too, if I may toot my own horn. 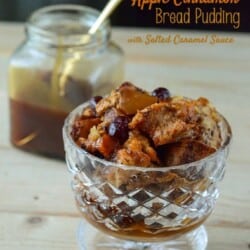 How do you power through your day? 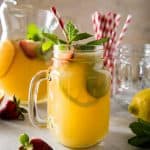 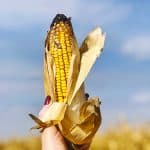 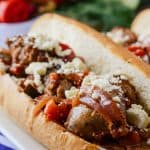