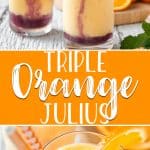 Brighten up your weekend with a fun Triple Orange Julius! Made with or without alcohol, this pretty orange creamsicle-flavored drink can be made in batches for a crowd, and may even permanently replace your favorite brunch cocktail!

This copycat orange Julius recipe is just as good if not better than the real thing! It’s creamy texture, is super refreshing for a hot day!

Whether a summer refreshment or an afternoon snacks, this homemade orange Julius recipe will be perfect for the whole family (just omit the alcohol for the kiddos of course!).

As a kid, one of the best treats I could imagine was a trip to the mall with Nana.

The mall was a 20-minute drive from our house, so going there was always planned ahead. She felt more comfortable driving on local highways than 1-95, which meant an extra 10-15 minutes added to the trip. Which, to a child, feels like eternity.

But the rewards were totally worth it. A new toy or book, fresh school clothes, and a stop at the Orange Julius shop.

Creamsicles were my favorite back then, and getting to enjoy a sippable one every once in a while was a real joy.

This Triple Orange Julius is like a blast from the past as far as flavors go. When you add some whipped vodka and orange liqueur, it turns into a brunch drink that rivals any mimosa or sangria!

Mix up a double batch next time you have friends and family over for a weekend meal and watch their faces light up with that first sip!

What Is An Orange Julius?

Orange Julius is actually an American chain of frozen beverage shops, dating back to the 1920s! The signature drink of the same name was sold at state and country fairs, and was even named the official drink of the 1964 New York World’s Fair. The company was bought by Dairy Queen in the 1980s, and the drink can now be found in their shops across the country.

The Orange Julius drink is a creamy, frothy smoothie-milkshake hybrid thanks to the main ingredients: frozen orange juice and milk. The original also included powdered egg whites to help emulsify the blend.

As far as the flavor, it is similar to an orange creamsicle or the Dominican morir soñando (one of Abe’s favorite drinks).

Dairy Queen used to have a version of their own as well!

The ingredients for this orange julius recipe are very similar to the original, and include a little liquor to make it a fantastic brunch addition!

As you can see, the triple orange comes into play thanks to the trio of frozen orange juice, orange liqueur, and blood orange juice.

Recipe notes: you can make this orange juice recipe dairy free by swapping the milk for coconut milk. Or if you want it extra creamy you can swap the milk for heavy cream. If you want to make this a high protein orange Julius smoothie, add a scoop of whey protein.

How To Make Orange Julius Without Frozen Concentrate

The key to the texture and flavor of this Orange Julius is in the frozen juice. Using fresh OJ and more ice will give you a different drink (more like a smoothie with less orange flavor), so plan ahead!

How To Make Orange Julius

Making an Orange Julius is just as easy as making a smoothie or milkshake!

Then, blend that baby up until it’s smooth and frothy and all slushed up. Divide it between three tall glasses (like these gorgeous Stella highball glasses from Joyjolt).

Next, hold a spoon upside down over each glass and slowly pour some freshly squeezed blood orange juice over the top. It will fall into the drink (because it’s heavier) and create some fun patterns around the glass. This step is completely optional (blood orange season is short!) but so worth the effort!

Garnish the glass with an orange wheel and some cute paper straws and get to sippin’! 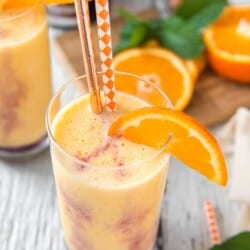 Brighten up your weekend with a fun Triple Orange Julius! Made with or without alcohol, this pretty orange creamsicle-flavored drink can be made in batches for a crowd, and may even permanently replace your favorite brunch cocktail!
No ratings yet
Print Pin Rate Save Saved Recipe!
Course: Cocktail, Drinks
Cuisine: American
Keyword: orange julius
Prep Time: 5 minutes
Total Time: 5 minutes
Servings: 3
Calories: 375kcal
Author: Erica

For a Boozy Drink

For A Non-Alcoholic Version

This recipe is intended for individuals ages 21 & up. Please drink responsibly.