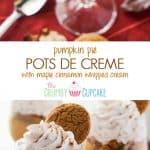 So…are you all pumpkin-ed out, yet?

I have to admit…after today? I may need to take a hiatus from pumpkin, myself.

Only a couple of days, mind you. Let’s not get crazy.

Today was Pumpkinfest at work, which is an annual event where lovely baking-type people bring in their favorite pumpkin-flavored baked goods. Cookies, cupcakes and muffins, breads and rolls, even a cheesecake. It was a bit like the Halloween feast seen in Harry Potter.

I’m pretty sure I at least tried everything in the room, and somehow managed a to keep the pumpkin coma away.

I tried to save room for a few bites of this delicious Pumpkin Pie Pots de Creme…but you guys are going to have to eat it for me.

Welcome to #PumpkinWeek day 5! Hosted by Terri from Love and Confections, 19 Bloggers will be sharing 65 pumpkin-filled recipes over the course of the week. Be sure to come back every day to see all the delicious creations – from muffins to cakes, cocktails, breakfast baked goods, savory pastas and stews, and gluten-free recipes too. You can also find these great recipes and more on Love and Confections’ #PumpkinWeek Pinterest Board!

I know, I know…it just looks like pudding. Or a boring, uninspired trifle.

I promise that it’s so much more than that, though!

Dating back to 17th century France, and literally translated to “pots of custard,” a pot de creme is essentially a boiled, tempered, then (water-bath) baked loose dessert custard. It’s everything good about flan and custard and pudding all in one, and then refrigerated and served with even more cream.

How’s that for some fall gluttony?

It’s most popular as a chocolate dessert, but the season, again, called for pumpkin.

Quite a tough job, but someone has to do it, right?

The great thing about these pots de creme is that there’s no baking involved! This is one of the easiest way to make this dessert, and while it’s not the traditional way, the shortcuts make it no less luscious and rich.

And to kick up the fall flavors a notch, I worked in gingersnaps and maple cinnamon whipped cream, and turned this already perfect dessert into a completely different thing.

So I suppose…in the end, I did end up sharing a pie recipe after all.

You have to admit, though…this is waaaaay prettier than a slab of pie, right?

(Plus, with this dessert, you can get away with that mountain of whipped cream on top! No one will judge you behind their own mouthful of it!) 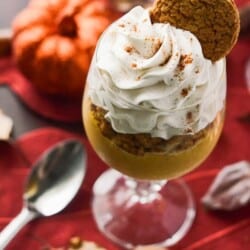