I’m not ready for spring.

Don’t give me that look. I know the weather this winter has been horrible. That darn groundhog wasn’t kidding when his shadow scared him back in the ground – it’s been a pretty bad six weeks, and coming from a Floridian like me, that’s something. We may not have had feet of snow, or icy roads, or generally miserable living conditions, but I’ve barely gotten to wear my flip flops this year, and there’s a problem with that.

All kidding aside, I personally enjoy winter quite a bit (I know, I’m nuts), and while I may not be ready for 90+ degree weather again, I can safely say these PEEPS® Surprise S’mores Cupcakes might help me adjust a little easier.

JUST TAKE ME TO THE PEEPS SURPRISE S’MORES CUPCAKES ALREADY!

If you’d rather skip my (pretty darn helpful) tips and tricks, essential cooking info, and similar recipe ideas – and get straight to this deliciously easy s’more cupcake recipe, just scroll right on down to the bottom of the page where you can find the printable recipe card! When I think of spring, I think of flowers and sunshine and cute little fluffy baby animals. New life. A refreshed earth, emerging from it’s chilly hibernation.

I don’t really think of s’mores, which I feel are more of a late summer/early autumn camping type treat; and yet, that’s what I’m serving up for you today. Rich, chocolaty goodness, birthed from a simple, store-bought box of cake mix.

I’ve said before that I rarely use cake mix, but I feel it has it’s place in the kitchen, and when life throws unexpected events at you, you have to make do with quick solutions, right? Of course, I wasn’t going to follow the script on the box, oh no. This box mix deserved to taste like homemade, even though I was skipping the sorting and sifting. And so, my favorite cast of characters took the stage: espresso powder, vanilla extract, melted butter, and sour cream. Espresso powder (and hot water), to elevate the richness and depth of the settled cocoa; vanilla, to enhance the sweetness of the cake. Butter, in place of vegetable oil, because it just tastes better, and sour cream (and an extra egg) for a nice fluffy, tender crumb.

I might use box mix every now and then, but that doesn’t mean I play by the rules. So. You want to know the “surprise”, I suppose.

It’s actually pretty straightforward. You can’t tell until you unwrap the little devils, but the cupcake sits on top of a slightly crunchy graham cracker crust.

And then, when you bite in to the colorful buttercream icing, you realize…hey, this kind of tastes like marshmallows. Really sugary marshmallows…

OH, THE HUMANITY. THE SECRET IS PEEPS®!!! No PEEPS® were harmed in the making of these cupcakes.

They were simply re-purposed. Honest! They practically jumped in my double boiler.

They didn’t go down without a fight, either. It was a messy endeavor, but the results were well worth it. A small word of caution: these babies aren’t for the fainthearted.

If you were never a fan of PEEPS® in your Easter basket as a kid, you probably will love the cupcake, but won’t care much for the icing. To that, I say – use less icing! It’s a standard buttercream, which is already sweet, and then you add over a half pound of more melted sugar (hello, diabetes).

They’re so worth eating, even if it’s with a tiny swipe of icing on the top.

But for you sugarholics out there, I guarantee you’ll love them.

And so will every kid you know! 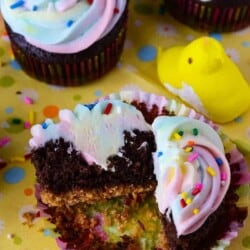 Looking for a little more PEEPS® stuff to love? Now onto some more amazing PEEPS® ideas! Hop through each post below to find delicious recipes, fabulous crafts, and more!

The Swimming PEEPS® Mocktini Drink from Our Mini Family

PEEPS® Wreath from Tried and True