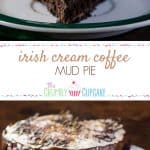 I used to make some pretty epic mud pies in Nana’s backyard when I was a kid.

There were these awesome, huge hedges that surrounded our yard that made for a great play area. I remember taking her old, rejected pots and pans out back and “cooking” up a storm, pulling my ingredients from the ground and trees surrounding me, empty paint cans serving as my stove top.

Can you imagine? Did any of you do the same thing?

Little did I know I’d be making real pies both as my profession and hobby as an adult. Surprise!

There was definitely nothing like this Irish Cream Coffee Mud Pie coming out of my little peewee kitchen, though.

I can’t help but sing “Lucky” by Britney Spears whenever I look back at these photos. I felt the idea behind the pie warranted St. Patrick’s Day decor, but it’s really got me to thinking while I write this post.

Ironically, the lyrics in the song are rather sad, and it actually used to make me tear up listening to it.

But unlike the starlet in the song…I AM lucky.

Lucky to be where I am today: with my health, a good job, a loving husband, a home to call mine, and the cutest puppy in the whole world, among so many other things. I, like so many others, often dwell on the things I don’t have versus the things I do have.

(Lucky I still have some of this pie in my fridge.)

It’s so easy to take things for granted.

This past week, I was on vacation in the Carolinas with Mr. Crumby, one of my best friends, and her beau. It was stunningly beautiful, especially to someone who’s lived on flat land her entire life. The green valleys, the snowy mountain peaks, the icicles dripping from the sides of the mountain, more prominent as we went higher and higher.

When we reached our cabin, I promptly made my first snow angel.

The next day, we went to the ski resort at the top of the mountain. When we got to base camp, I had to catch my breath, and not just because the air was thinner. I drank in the sights with my eyes, not wanting to miss a single detail, from the foggy peak to the multicolored people zooming and tumbling down the slopes.

Later on that day, I was one of the people tumbling down the easiest of the slopes. We rented snowboarding equipment, which is a winter sport I’ve clearly never tried.

It had been a very dreary day, and the fog that had been at the top of the mountain had pretty much enveloped the whole thing by the time my hubby and I geared up and hopped on the ski lift. Visibility was crap, and for a rather unbalanced newbie snow-bunny like myself…

In short, I was terrified. To the point that I started crying out of frustration when I fell for what seemed like the hundredth time, and I was barely more than a few hundred feet from where we started.

We both made it down only once that day, due to the fact that it took so long on our first run, it was super crowded on account of it being ’80s Weekend, and the ever-present fog that wouldn’t go away was getting thicker as the day wore on.

My pride was severely injured, but I didn’t take into account that at least I didn’t get hurt physically, unlike numerous other people I had seen get dragged off the mountain that day, who went home with much more than few bruises and a sore ego.

When we went back a couple of days later, the weather was clear, my nerves were strong, and even though I was achy as hell, I made it up multiple times that day, feeling more and more confident in myself as I came surfing down the slope mostly without falling.

Coming home was bittersweet. Knowing we were leaving behind impending snow for the balmy temps of Florida saddened me, but I was instantly grateful to strip off my heavy jacket and snuggle my puppy in my arms after the long week.

Little things like that are the ones you don’t really think about. The grass is always greener…until you return to your own yard.

This week’s Sunday Supper is allllll about pie, both sweet and savory. I never would have looked at a quiche as a pie, but then again, I once had a hard time seeing how mud pie is a pie.

You start with a chocolate cookie crust – Oreo is the way to go. Then you bake in a flourless chocolate whiskey cake, because it’s rich and thick and serves as one hell of a base.

A layer of homemade dark chocolate espresso pudding comes next, because what’s Irish coffee without some kind of coffee? Two fluffy layers top it off – one a mousse with Irish cream, the other a light Irish whipped cream.

What makes it Irish?

Irish coffee is a blend of coffee, whiskey, and brown sugar, and it’s usually crowned with some whipped cream, so why wouldn’t I treat this mud pie the same way?

The only difference between this pie and the coffee? I can down a slice of this much faster than a cup of that.

Temperature differences, you know. Don’t take your taste buds for granted, either!

Even more amazing pies to try! 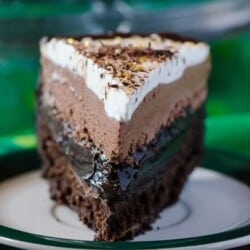 Recipe adapted from Martha Stewart. There has been some concern over the amount of cake batter and pudding that this recipe makes. I personally made this the first time following Martha’s recipe, then a second time to create this and it worked flawlessly both times in a 9″ springform pan. However, I’ve added this addendum to suggest using a 10″ pan to address the worried comments I’ve gotten.The flourless cake does spring up to the top fairly high, but it sinks back down under the weight of the pudding, and when the whole pie is done it will reach the very top of the pan.