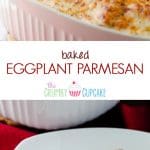 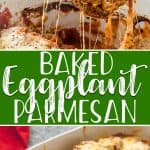 A healthier twist on chicken Parmesan, this is the best baked Eggplant Parmesan recipe! It’s a melty, cheesy, wonderland of Italian flavor with the added bonus of nutritious veggies!

I mean, I cut three separate pieces of this Baked Eggplant Parmesan to take photos of, and this is the best I could capture, pretty much straight from the oven.

But you know what? Ugly or not…eggplant is absolutely flippin’ delicious.

Sometimes, you just need to be vegetarian for a day or two. If you’re feeling the itch (like I was), this recipe does not disappoint!

I really can’t remember what made me decide to make Eggplant Parmesan for the first time.

I want to say I was really craving lasagna, but this was back when I was a gym regular, so I was trying to avoid unnecessary carbs and starch from the pasta.

Either way, there was cheese involved, so I had faith that it would be tasty, even if it was odd.

I picked up a couple of big, lovely eggplants at the farmer’s market, found a recipe online for a baked version (usually if I can bake something versus frying it, it’s on,) and set about stepping right out of my comfort zone and into the wide world of vegetarian cuisine.

While I can’t say that I never looked back (because, to me, there’s nothing like a big fat burger or juicy chicken breast,) I can say that I’ll never doubt weird vegetables again.

Eggplant is awesome, and I understand why vegetarians use it as a meat substitute.

Low in calories and packed with vitamins and minerals, eggplant is a tender, spongy vegetable of the nightshade family. With only 20 calories per cup, eggplant makes a great substitute for higher calorie ingredients in traditional dishes.

I know quite a few dietitians, and they all have a saying – eat the rainbow! There aren’t too many nutritious purple veggies to use in our diets, so eggplant is a wonderful one to sneak in when we can!

Don’t let its funny, bulbous shape and purple color fool you though. Eggplant is a rather mild food that can be used in dishes with bold flavors, as it tends to take on other flavors easily.

What is Eggplant Parmesan?

Eggplant Parm is the vegetarian twin of chicken Parmesan, with the substitution of a “meaty” vegetable – the eggplant.

The basic ingredients of this recipe are simple and few:

I can hear you asking – with all that cheese, how is baked eggplant parmesan healthy? Well, this lower-fat baked version melts in your mouth with delicious Italian flavors you crave while sneaking in some extra veggies, as well.

Baking the eggplant instead of frying allows you to indulge in the calories in the cheese without worrying about the ones that frying oil would add. It makes a great meatless Monday meal – any day of the week!

Since eggplant is a very mild flavor when cooked, it tends to take on the bolder flavors of the other ingredients it is cooked with. With this in mind, you can expect your eggplant parm to encompass rich, tomatoey, cheesy, Italian flavors similar to those in Chicken Parmesan.

How to prepare eggplant for Eggplant Parm

Do you have to peel eggplant for this recipe?

When making this recipe, you will most likely want to peel the skin off the eggplant before you start (I did).

As eggplants grow larger, their skins become more tough and bitter, making them pretty unpleasant to eat. Smaller eggplants tend to have a softer skin and are less bitter than larger eggplants, so you can get away with leaving the skins on those if you’d like.

As far as nutrition goes, most of the fiber lies in the skin of this vegetable, so if you’re looking to get in some extra nutrients, you may consider leaving the skin on!

How do you avoid soggy Eggplant Parmesan?

Nobody likes a soggy eggplant. The best way to avoid mushy Parm in to salt the veggie slices first!

Once you’ve sliced your eggplant, place the slices on paper towels and salt the eggplant liberally. Allow the eggplant slices to sit for at least 1-2 hours, allowing the salt to draw out any extra moisture.
You will see beads of water rise to the surface of the slices – which is exactly what you want!

Pat the slices dry with a paper towel, season with some pepper, and proceed with the breadcrumb step. You won’t even need any additional salt, since it has soaked into the veggies already.

This is truly the most tedious step of this recipe, so make sure you set aside some extra time to do it! The rest of the prep is so quick and easy, and the results are completely worth the effort!

HOW TO MAKE BAKED EGGPLANT PARMESAN

Can you make Eggplant Parm ahead of time?

I recommend making this recipe no more than a day in advance – anything longer than that will leave you with mushy eggplant with no texture!

If you’d still like to get the baked eggplant prep done in advance, simply bake the rounds and store them in a plastic zipper bag in the fridge. Assemble the dish when you’re ready to bake it to avoid losing the crispness of each bite.

Can you freeze prepared eggplant parm?

With all this talk of soggy eggplant, you might wonder if it’s worth freezing. Prepping it more than a day in advance to refrigerate may not be a great idea, but freezing it is!

Assemble the eggplant Parmesan, tightly cover the casserole dish with cling wrap and foil, and freeze it for up to three months.

When you’re ready to bake it, place it directly in the oven from the freezer – this will keep it from thawing slowly and soaking the eggplant with the stored moisture.

How long are the leftovers good for?

Since cooked eggplant tends to absorb a lot of moisture, leftovers of this recipe will only be as good as day one for about 3 to 5 days in the fridge.

After a few days, it might become too soggy for your liking after reheating. I recommend finishing it as soon as possible, because this dish is best eaten fresh!

What to serve with Eggplant Parmesan

This recipe is best served with a fresh green salad or some roasted vegetables. Try to stick with something lighter, since your eggplant will be the main event during this meal! Try this recipe served with some of these delicious sides! 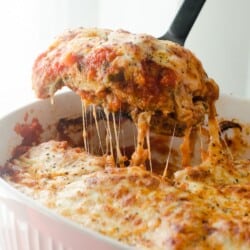