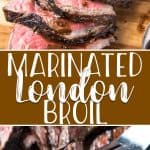 The secret to this insanely flavorful and tender Marinated London Broil is all in the timing! A day’s worth of soaking in a simple balsamic-wine marinade rewards you with a delicious dinner that’s versatile and ready in no time.

I have no idea why I haven’t shared my London Broil with you guys yet.

After almost 5 years into blogging, there’s definitely not enough beef in my recipe archives. And since this is something I make pretty often…I’m not sure why I’ve held back on you.

I decided last fall that 2019 would be The Year Of Dinner Recipes, since two reader surveys told me that’s what you guys are mostly here for.

I’d like to think I’m off to a pretty good start.

This insanely delicious steak recipe is a must-make! It’s SUPER tender, full of flavor, and there is zero waste, since you reduce the London broil marinade into a serving sauce!

All it takes is a little patience during marinating time, a cast iron skillet, and a hot stove.

JUST TAKE ME TO THE LONDON BROIL ALREADY!

If you’d rather skip my (pretty darn helpful) tips and tricks, essential cooking info, and similar recipe ideas – and get straight to this deliciously easy London broil recipe, just scroll right on down to the bottom of the page where you can find the printable recipe card!

What Is London Broil?

I love sharing recipes like this London broil, because I get to make my hubby work – he gets to answer my questions for me.

Being a career butcher, Abe is often asked, “What part of the cow is London broil?”

Well…in spite of what the labels at the store say, there is no London broil cut.

“London Broil” is actually a cooking method, and one that has roots in America instead of across the pond. It refers to tough, lean , inexpensive cuts of beef that are marinated and seared, grilled, or broiled at a high heat.

London Broil should never be tough. If it is, it was not marinated properly or for a long enough time. Quickly cooking lean steak often results in tough, chewy beef (I’ve made this mistake with fajitas.) The longer you marinate your beef, the more tender it will be. 24 hours is ideal, so if you can get away with it, plan far ahead for dinner!

As for which beef cuts to look for, flank steak and top round steak are both cut from the rear part of the cow and work well for any London Broil-labeled recipe. Try to find the thickest cut possible, also – 2-inches thick makes for an ideal slice!

What Goes In A Delicious London Broil Marinade?

Everyone has their tastes, from herb heavy to soy-based. I’m a red wine & balsamic fan, so I like to balance my marinade around those flavors.

What Temperature Should London Broil Be Before Serving?

Depending on your tastes, you can cook your steak for more or slightly less time than I do.

What To Serve With London Broil

I’m pretty partial to some sort of starch and veggie with any kind of steak. Mashed Potatoes or Baked Potatoes are a good choice, but Mushroom Risotto or Baked Macaroni & Cheese would be equally delish.

As for veggies, a tasty salad is a no-brainer. Complement the marinade with Red Wine & Maple Carrots and Bacon Balsamic Brussels Spouts.

If you love bread with your hearty meals, my Purple Potato Rolls are a fun, convo-starting side!

How To Cook London Broil On The Stove 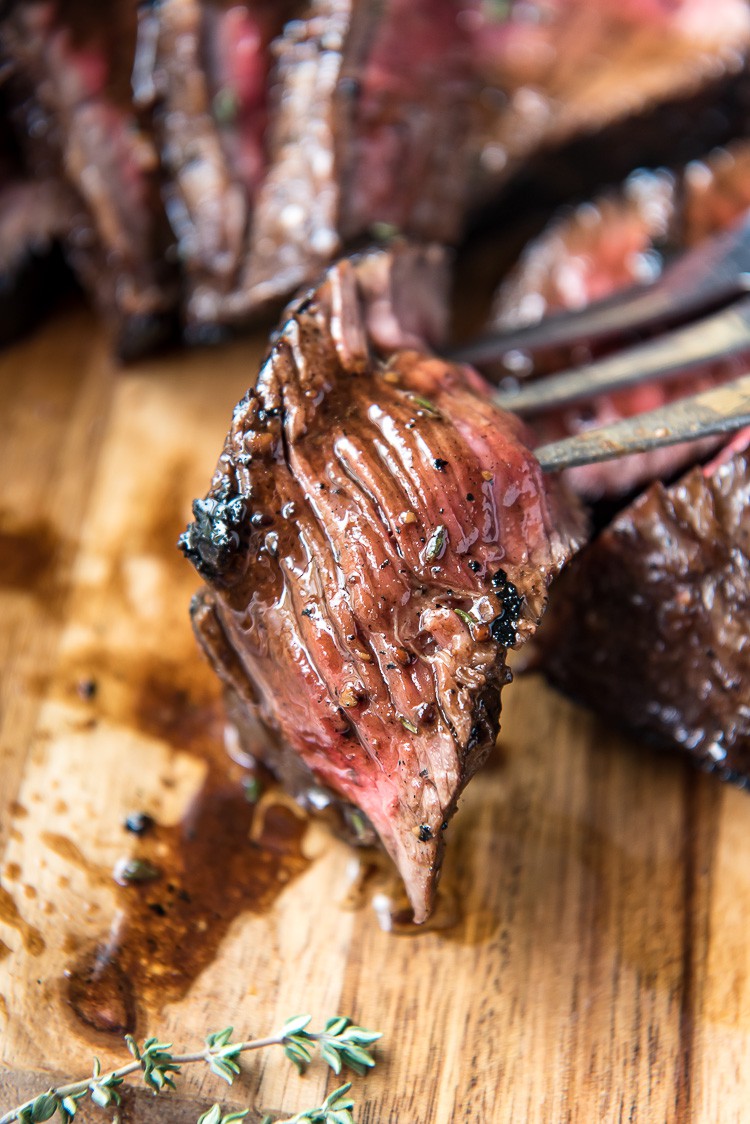 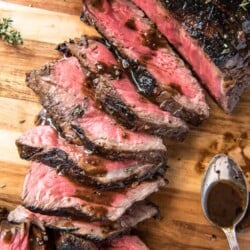