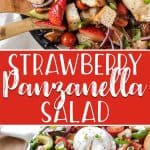 This Strawberry Panzanella Salad will be the breakout star of every meal this summer! Full of juicy tomatoes, sweet strawberries, toasted bread cubes, and topped with creamy burrata cheese, you won’t be able to resist this classic Tuscan dish. 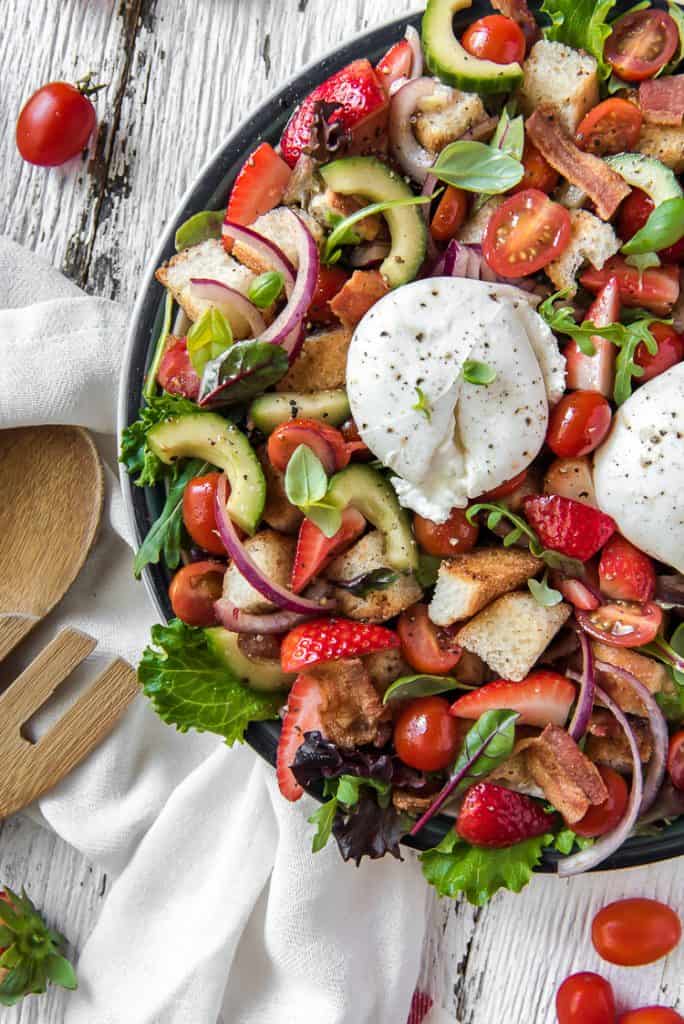 I just have two words for you today.

Don’t wrinkle your noses, guys. You HAVE to try this!

Avert your eyes, my low carb friends. This salad is definitely not gonna fit into your meal plan, but it sure is gonna make your mouth water!

JUST TAKE ME TO THE STRAWBERRY PANZANELLA SALAD ALREADY!

If you’d rather skip my (pretty darn helpful) tips and tricks, essential cooking info, and similar recipe ideas – and get straight to this deliciously easy panzanella bread salad recipe, just scroll right on down to the bottom of the page where you can find the printable recipe card! 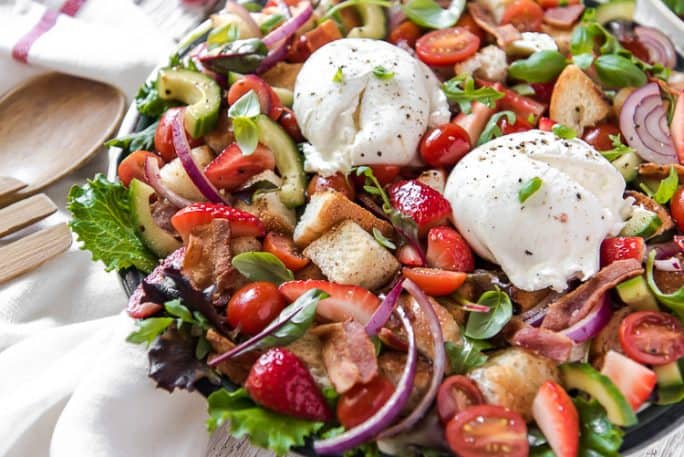 We already thank Italy for some of the best foods to ever grace our tables.

So, of course they’re also responsible for the original panzanella recipe.

My version is a teeny bit different than tradition. Instead of pre-soaking my bread, I toasted it in a bunch of bacon grease (yum). I also added strawberries and cucumbers to the tomatoes and onions that are usually found in bread salad.

And then…burrata. Because I need more excuses to eat it. 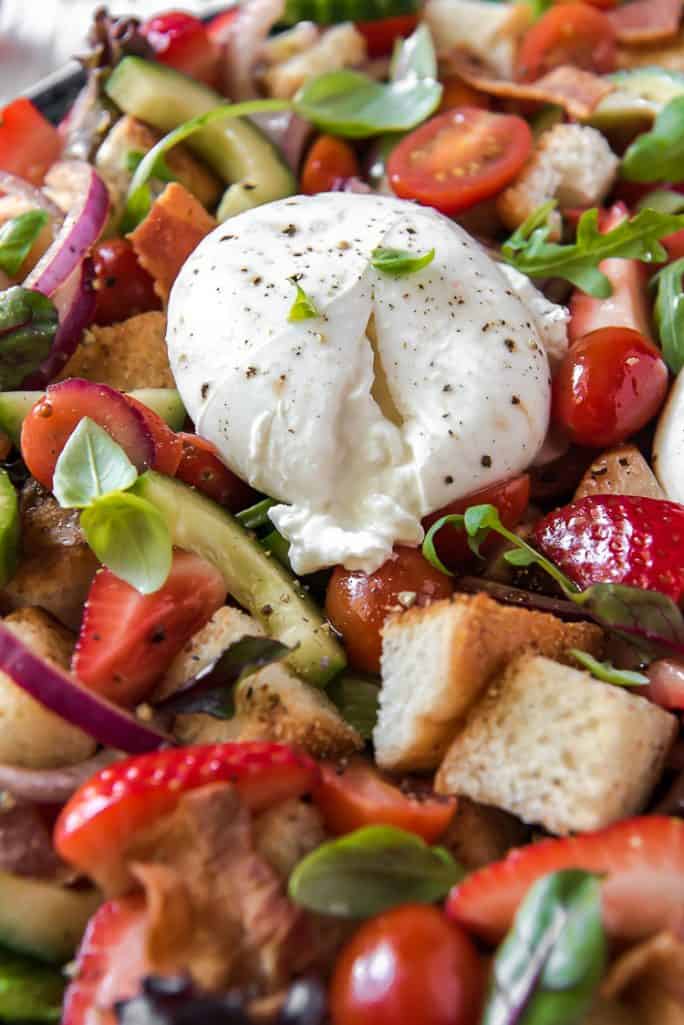 What Is Panzanella Salad?

Panzanella (or panmolle) is a popular summer chopped salad consisting mainly of bread and tomatoes. Created in Tuscany, chunks of toasted stale bread are usually soaked in water and squeezed dry, then tossed with juicy summer tomatoes and other salad vegetables.

Traditionally, this “bread salad” has been a way to use up the hardened ends of leftover breads.

Soaking the stale bits in water breathes a little life back into them, and combining them in a salad with a lively vinaigrette gives them flavor. 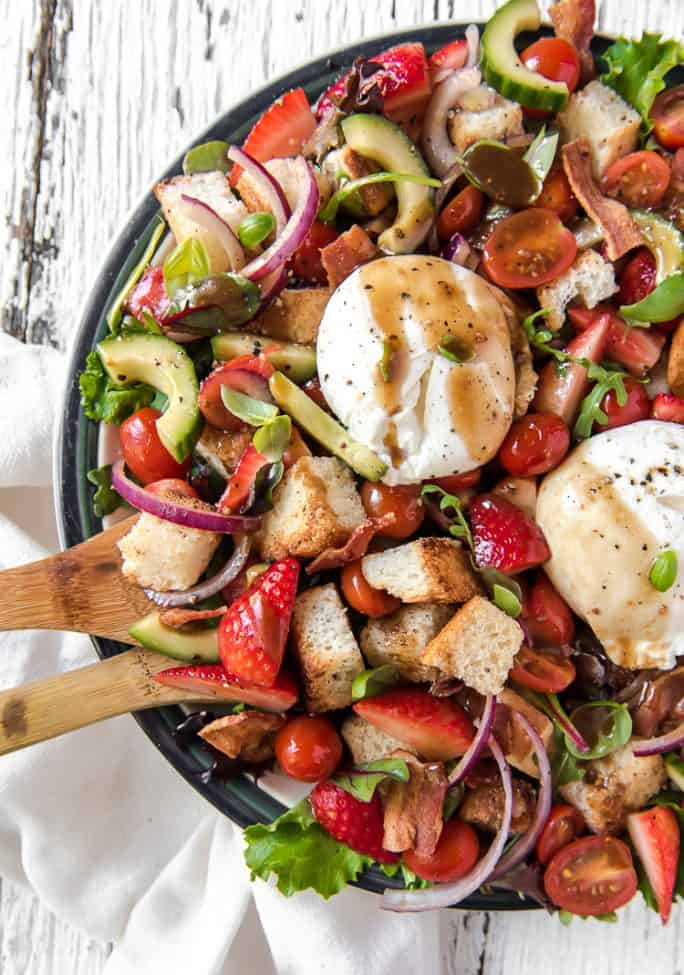 What Kind Of Bread Is Best For Panzanella?

Since the bread soaks in liquids, your best bet is to opt for a hearty artisan-style bread. The thick crust of a ciabatta, sourdough, or boule loaf will keep the bread from becoming overly soggy.

If you don’t have any stale, day old bread, cube up fresh bread and spread it onto a baking sheet. Let it sit out overnight to harden before making the salad.

If you’re in super desperate need of panzanella, toast the cubes of bread for 15-20 minutes at 300 degrees F until they’re lightly browned but still chewy.

Can You Make Panzanella With Croutons?

You could, I suppose, but you shouldn’t.

Croutons are usually very small and overly dry due to their size. You’d really be doing a disservice to panzanella and yourself by using them instead of larger stale bread pieces. 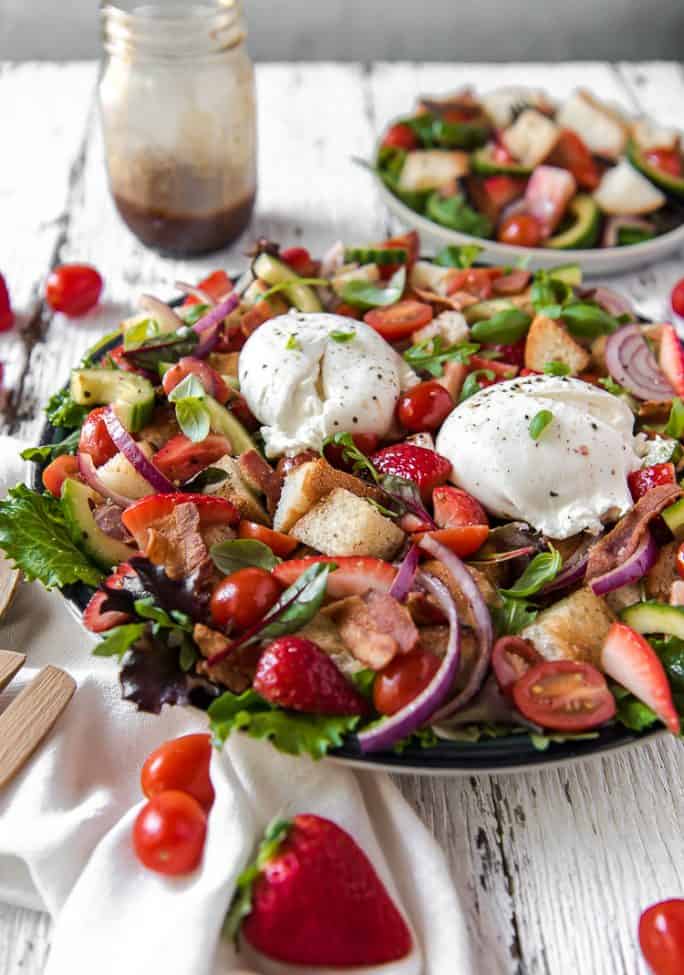 Can Panzanella Be Made Ahead Of Time?

You can mix up everything but the bread cubes and refrigerate it up to 1 day in advance. Add the bread 30-60 minutes before serving to allow it to soak up some of the flavors.

Leftover panzanella can be stored for 1-2 days in the fridge, but the flavors will change as the bread continues to soak.

What To Serve With Panzanella Salad

This bread salad makes a wonderful brunch or lunch main dish. Adding some leftover roasted chicken will make it even heartier.

If you’re serving panzanella as a side dish for dinner, stick with the summer season theme and fire up that grill! Try one of these as a main: 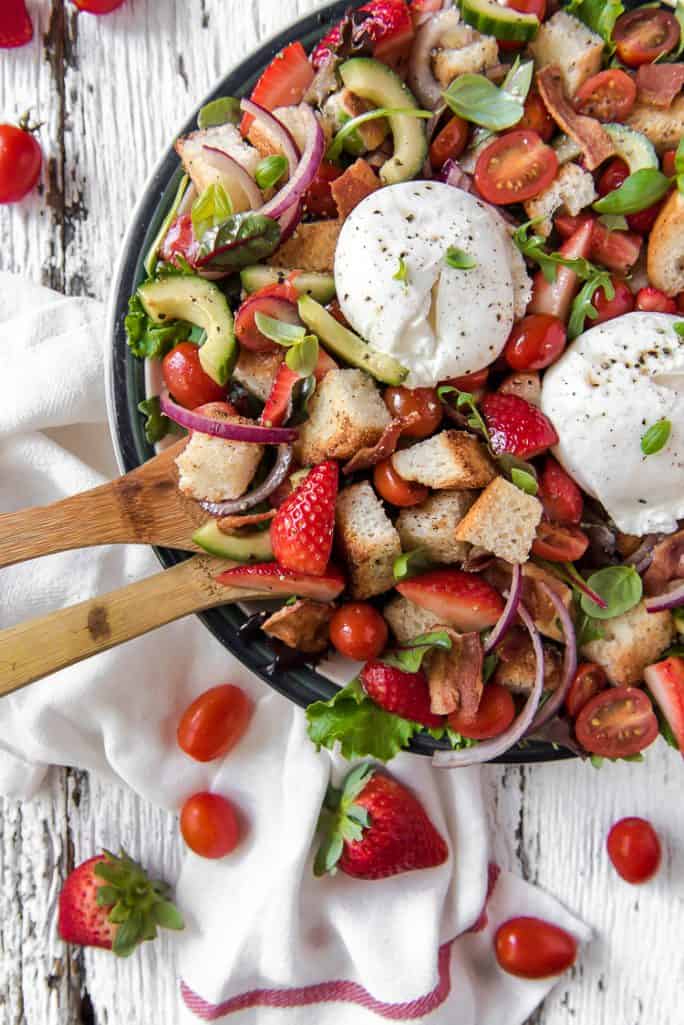 How To Make Panzanella

First, make your dressing. Add olive oil, balsamic, honey, Dijon, and some salt and pepper to a mason jar. Seal the lid tightly and shake well until the dressing is emulsified.

Next, toss lettuce, tomatoes, strawberries, cucumber, onion, and fresh basil with half of the dressing in a large bowl. Set it aside to marinate.

Then, fry bacon in a large skillet set over medium heat until it crisps up to your liking. Set it aside on a paper-towel-lined plate to drain, leaving the grease in the skillet.

Next, add the stale bread cubes to the pan (in batches if necessary) with the bacon grease and return to the heat. Toast the bread, tossing occasionally, until it is evenly golden brown. Crumble or chop the bacon and gently toss it with the bread cubes.

Finally, add the bread and bacon to to the bowl with the salad mixture. Sprinkle with salt and pepper to taste, and allow everything to marinate unrefrigerated for 30-60 minutes.

Transfer the salad to a large serving plate or bowl and top with burrata cheese when you’re ready to serve. Provide the remaining balsamic vinaigrette on the side for drizzling. 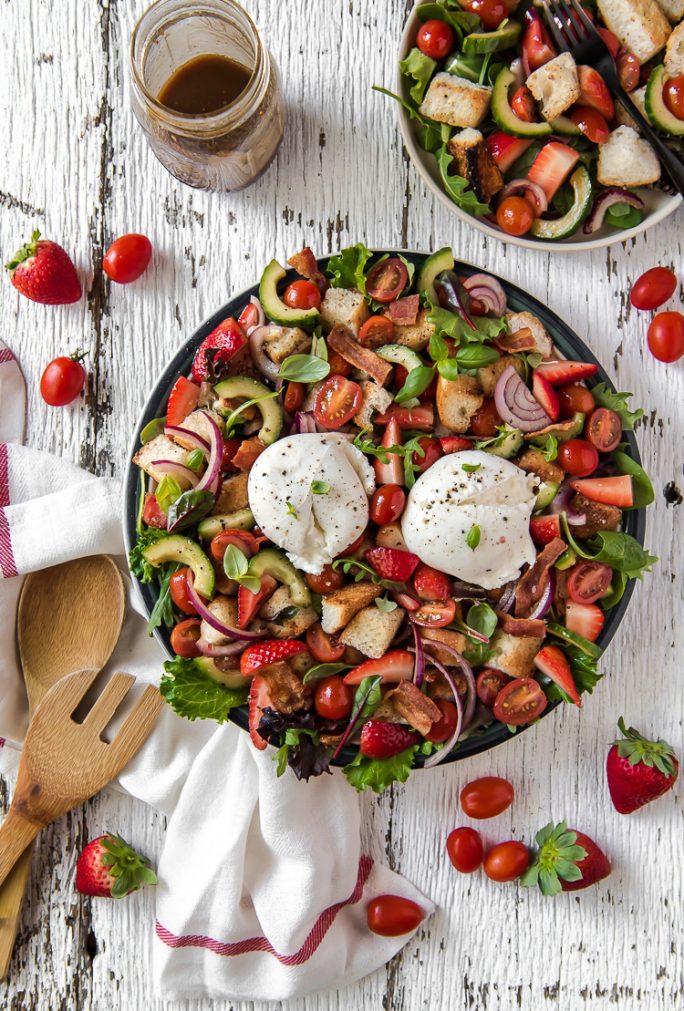 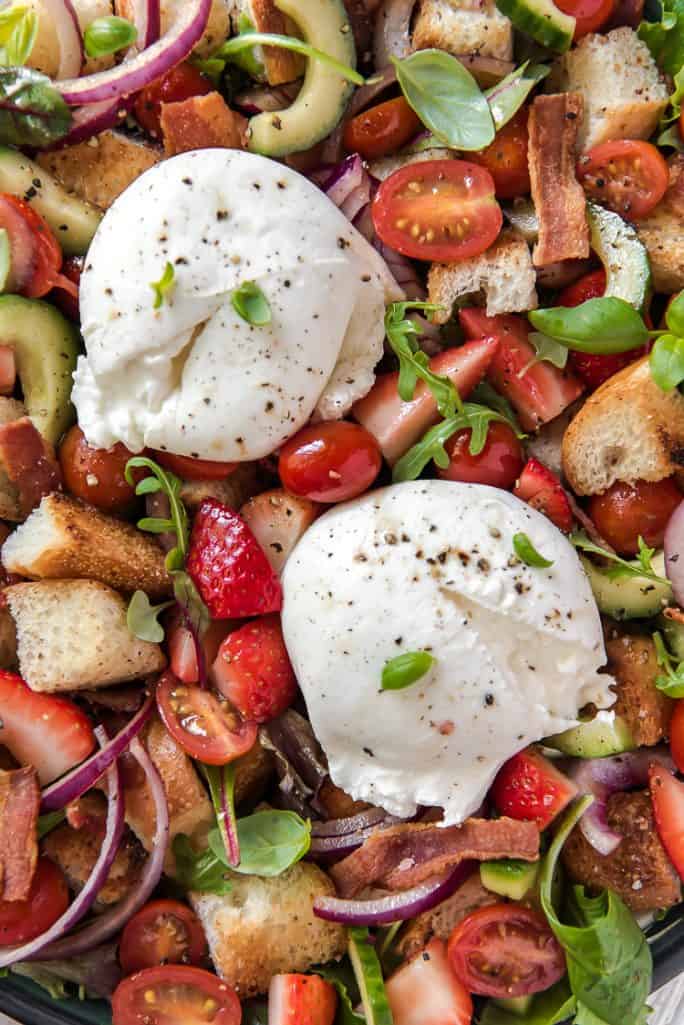 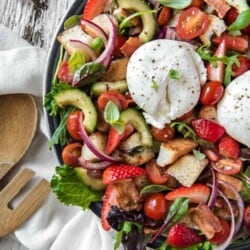