Fall and football season are almost here again, and these mini German Potato Skins can be found on the snack table! Super crispy baby potatoes covered in caramelized onions, beer-braised bratwurst, and a pile of sauerkraut make Game Day so much more delicious!

This recipe is a bit of false advertising.

When you think potato skins, what comes to mind? Let’s paint the picture – a big slab of crispy potato, most of the innards scooped out, filled to the brim with cheese and bacon and sour cream and whatever your hungry brain can come up with.

These little guys are a bit different. First things first, yes…I made them with baby potatoes! Because I love all things mini and two-bite and it’s my blog and I’ll bake what I want to.

Second, they’re part of a huge, super fun football tailgating link up, and every red-blooded American NFL fan knows that small food that requires no utensils is the best vehicle to the mouth when watching an intense game.

With the official start of football season around the corner, it’s time to tailgate! In celebration, I’ve joined a group of bloggers from all over the country — all of whom are big football fans! — to bring you 64 tailgating recipe ideas for a terrific football party. Click on their links below this recipe to join in!

So, how else are the skins not like the others?

Well, there’s a lot more potato in them than usual. Because…I didn’t remove any at all. I just carefully piled my toppings on the little spuds and let everyone go to town.

They’re so much smaller, I felt like it would be a huge waste to scoop out what little actual potato was in them just to fill them with more sausage.

And honestly, let’s be real. As a self-respecting German, I never turn away a potato. Why wouldn’t I want more of them in my appetizers?

When my sweet blogging friends Susannah and Erin approached me to take part in their huge Tailgate Campaign (<–my name not theirs) this year, I immediately jumped on the bandwagon.

I grew up going to Friday night high school football games, and spending many a Superbowl in the 90’s rooting for a team everyone knew was going to lose (Sorry, Buffalo,) so the idea of teaming up with another 63 football-loving food bloggers to rep our home teams was something I just couldn’t resist.

Even though I had no idea what made a good football game back then (us kids basically just loved having a reason to stay up late, drink soda, eat deliciousness off the grill and goof off, never actually watching much of the game,) I found myself genuinely interested as I got older. I might still not know every detail about the game, but I can follow along and yell and shout at the TV just like all of my guy friends can!

Mr. Crumby was part of a Fantasy League for a few years within our group of friends, and those Sundays are still among some of my favorite memories.

As far as my team? I grew up in a Bills-loving home, but while my family hails from the frozen north, I do not. I love all my Florida teams, but geographically…

I gotta represent my Jacksonville Jaguars!!

I know, I know. They’ve had a rough go of it, lately. In general. Maybe they need some German Potato Skins in their lives before kickoff!? They’re definitely comfort food, so if all else fails, they’ll make a great post-game snack.

Bring on the sauerkraut. And probably the beer. Here’s to NFL 2016! 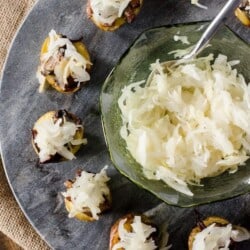