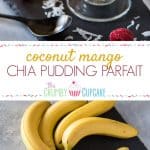 Go healthy with the most surprising dessert! This vegan, paleo, gluten-free Coconut Mango Chia Pudding Parfait is super simple to throw together and will satisfy even the biggest sweet tooth! Real talk: before this parfait, the only way I’d ever had chia seeds was in my breakfast smoothies.

And before that? My Nana owned a Chia lamb. True story.

I wasn’t totally sure how I’d feel about pudding made with those strange little seeds, since I’m not a superfan of tapioca, but I tell you whut: life changing. And good for you, to boot, so there’s that. Someone please tell me how to deal with being 33. Three weeks. That’s how long I’ve been 33, and thus far, it’s not exactly performing as advertised. I read somewhere that 33 is the magic year when you discover true happiness in every aspect of life. You shake off your childhood and truly come in to your adulthood with a level head full of hope and a positive self-image.

I mean, I can’t argue with that. I like myself, and I have a fairly “can do” attitude (almost to a fault.)

I have a steady job that brings in a nice income (even though I’m mostly miserable and would rather go entrepreneur if it was financially feasible.)

I’m lucky enough to be happily married to a truly good man (who puts up with eating cold dinners due to photography shoots more often than should be allowed, among other things.)

I don’t feel a need or desire to go out on the weekends and make a fool of myself at a bar (not that I ever did.)

I make an effort to exercise (even though the sched has been pretty spotty lately.) That last point is a bit of a sore subject at the moment. If you’ve hung around here for a while, you know that my bestie Lara and I are pretty yo-yo as far as staying healthy – me more so than her of course, since she’s a dietitian and has to keep herself up, so to speak. In the 2 1/2 years that I’ve been blogging, and the almost 5 since my wedding day, I’ve gained just shy of 30 pounds.

That may not sounds like a lot, but to me it most certainly is. I don’t like the way I feel at this weight.

And it’s not like losing weight and staying healthy hasn’t been at the front of my mind, either. I don’t make resolutions, but every year I make an effort to

I somehow naïvely thought that hitting 33 would make me get my ish together. I was looking forward to everything falling in to place, but then I remembered that life isn’t a fairy tale, and it’s still hard every single day. Results don’t come from sitting passively by and watching things happen – you have to make them happen. Forgive me for sounding like a motivational poster, but it’s true.

Einstein supposedly defined insanity as doing the same thing over and over and expecting a different result. If 33 is my brink of insanity, then I need to stick to a workout schedule…and start replacing my Ben & Jerry’s with way more of this chia pudding. Antioxidants, Omega-3, fiber, protein, calcium. Sounds like the healthiest little thing you could imagine, right? Chia seeds pack so many nutrients in such a tiny package, I’m about to put them in everything.

For this Coconut Mango Chia Pudding Parfait, some yummy coconut milk (vegan and dairy-free!) was the perfect vessel to draw out their gelatinous side, and it made the whole eating experience that much more delicious! I used bananas, raspberries, and mango to layer mine, but you could use any fruit you like and it will be equally fab.

I ate half of one after this shoot, and the rest for dinner that night (since I’m a grown up) – of course, you can make yours a tad smaller (these were pretty big) if you truly want single portions. Either way, if you’re on the fence about chia pudding, just dive in headfirst. 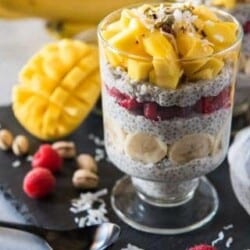 *Prep time does not include chilling time