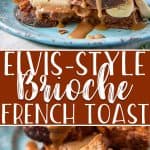 Elevate your breakfast with a batch of this incredible Elvis-Style Brioche French Toast! Fresh bananas, crispy bacon, and an easy peanut butter syrup turn an ordinary weekend breakfast into something super special! 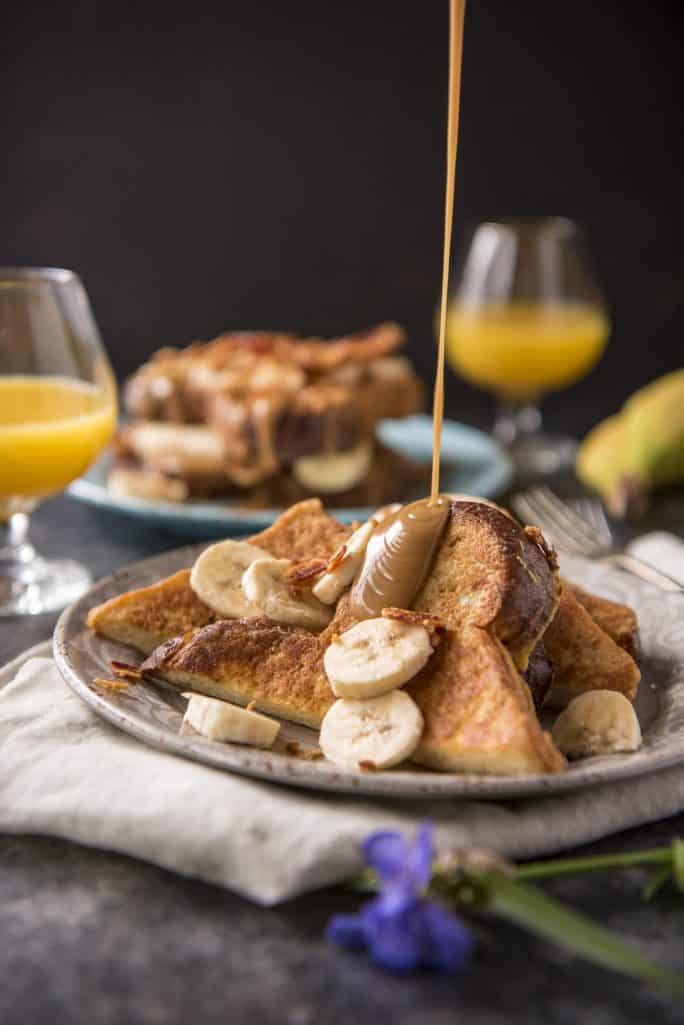 In the eternal breakfast battle between pancakes and waffles…I firmly stand by French toast.

That’s not to say I don’t love the other two. I do – just in a much smaller capacity. I’ve always been a big fan of the eggy, cinnamon-kissed, pan-fried slices of thick bread. I remember Nana sprinkling them with granulated sugar as a kid, and I do the same from time to time when I’m feeling nostalgic.

Nowadays, though, it’s usually butter and pure maple syrup or honey. Grown-ups are allowed to eat all that sugar. 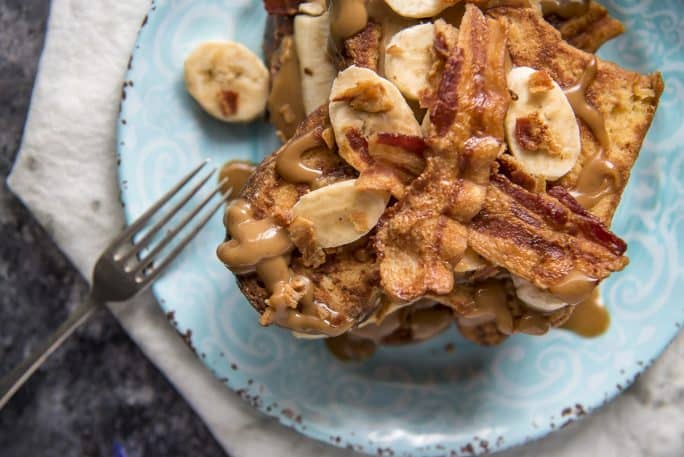 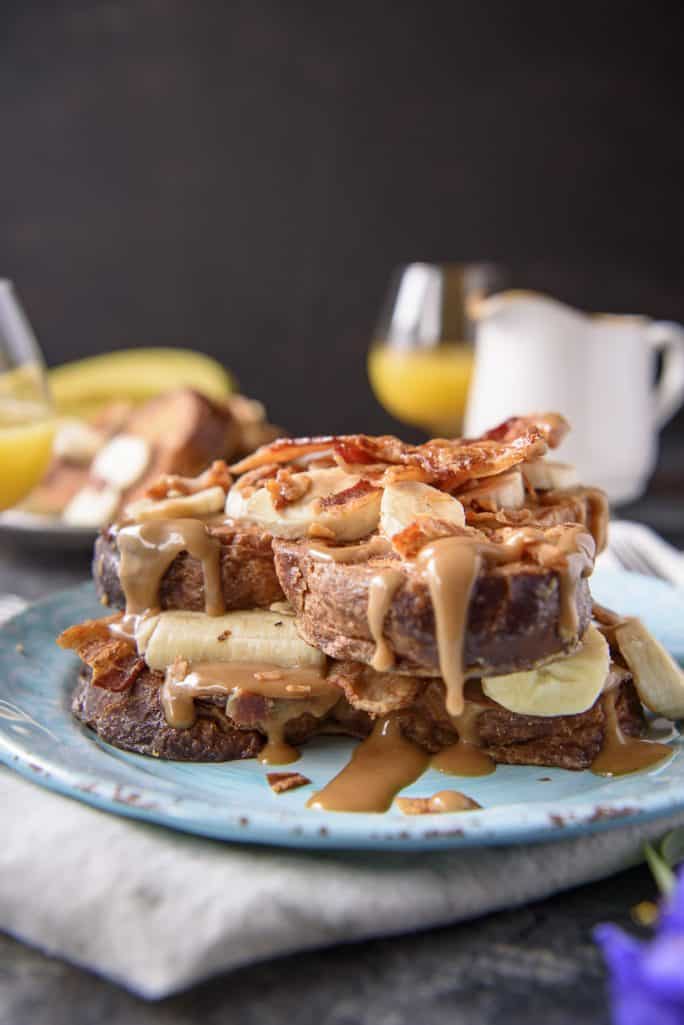 My dear Nana also never bothered with brioche or challah bread when she made French toast. Standard sandwich bread was her go-to. While it was always perfectly delicious, I haven’t made it that way since discovering the rich goodness that is brioche.

This easy brioche French toast is something all you sweet breakfast lovers should try at least once in your lives. You can find it in many stores (I’ve personally gotten it from both Aldi and Trader Joes), but using a homemade loaf of brioche is doubly satisfying.

I promise you’re bound to feel like Suzy Homemaker if you go full-on DIY with this one. Especially if you’re aiming to impress and delight!

This Elvis-style French toast recipe is written for two but can be easily doubled or multiplied. It’s as perfect for large holiday breakfasts as it is for lazy weekend brunches. The extra steps involved (bacon frying, banana slicing, syrup mixing) are things that can easily be done while the bread is frying. 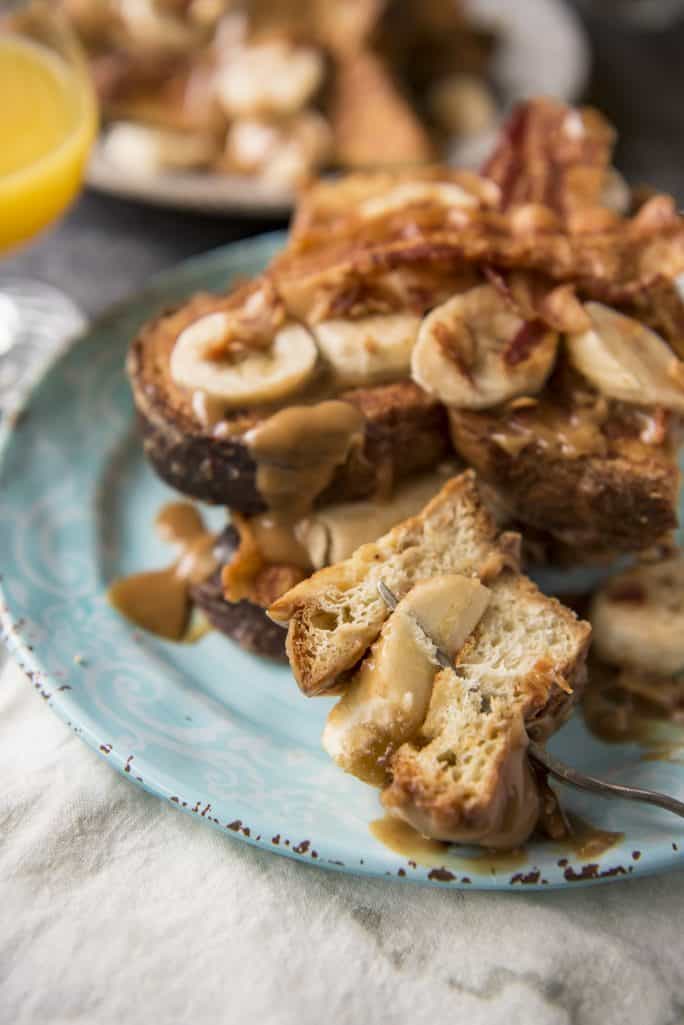 So…what do you mean by an Elvis-style French toast recipe?

The Elvis-style association comes from Elvis Presley’s adoration for peanut butter and banana sandwiches. There are many differing accounts of what his favorite sandwich actually consisted of, but they all contain consistent ingredients.

Many restaurants and numerous cookbooks feature “The Elvis” (or at least their version of it). Some recipes call for the sandwich to be fried on a griddle, so a rich brioche French toast recipe in honor of him (and his indulgent taste in sandwiches) made sense.

Besides, I wanted a reason to make peanut butter syrup. You’ll understand why when you try it – it’s so embarrassingly simple but so so good. 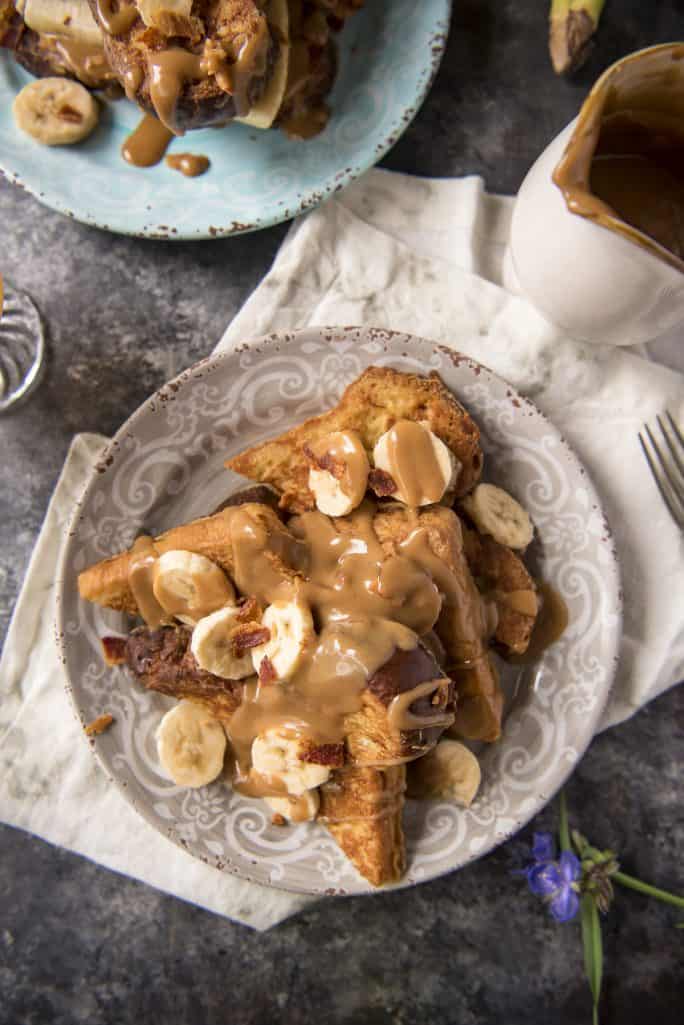 Is this the best French toast recipe out there? You be the judge.

For me, if it involves bacon, it’s a win. I usually can’t handle peanut butter-banana sandwiches, but in this French toast recipe, they strike a beautiful harmony.

Plus, come on – there is peanut butter in the custard mix. All you PB lovers out there are gonna go nuts for this.

If you really want to one-up me, here, add chocolate chips on top of the hot, freshly fried French toast. Watch them melt, drool a little, don’t forget your insulin shot. 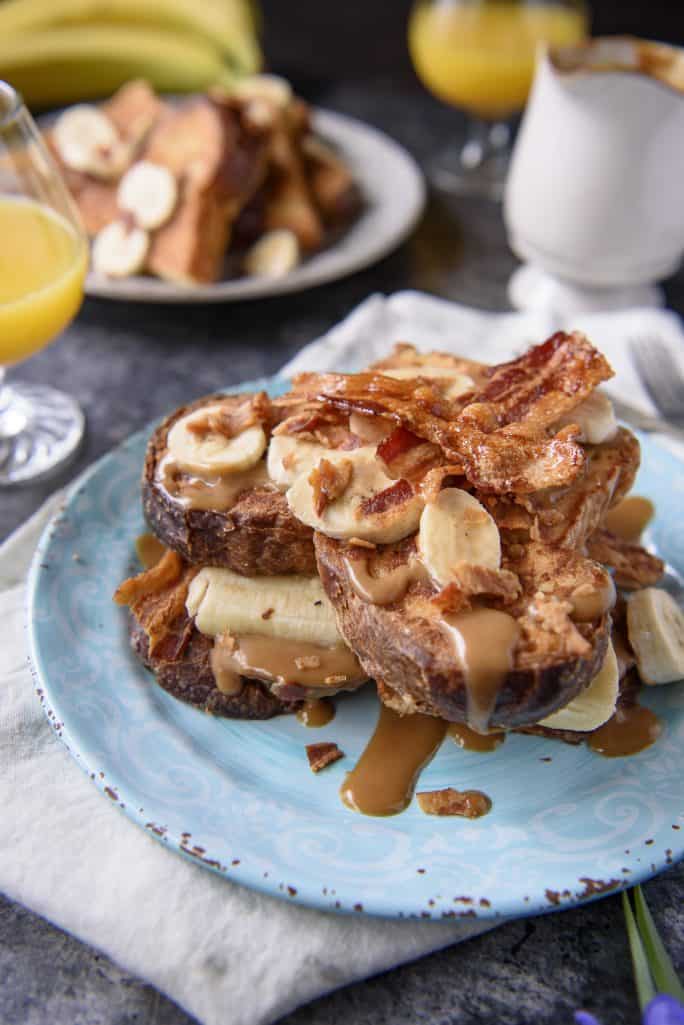 How to make French Toast: 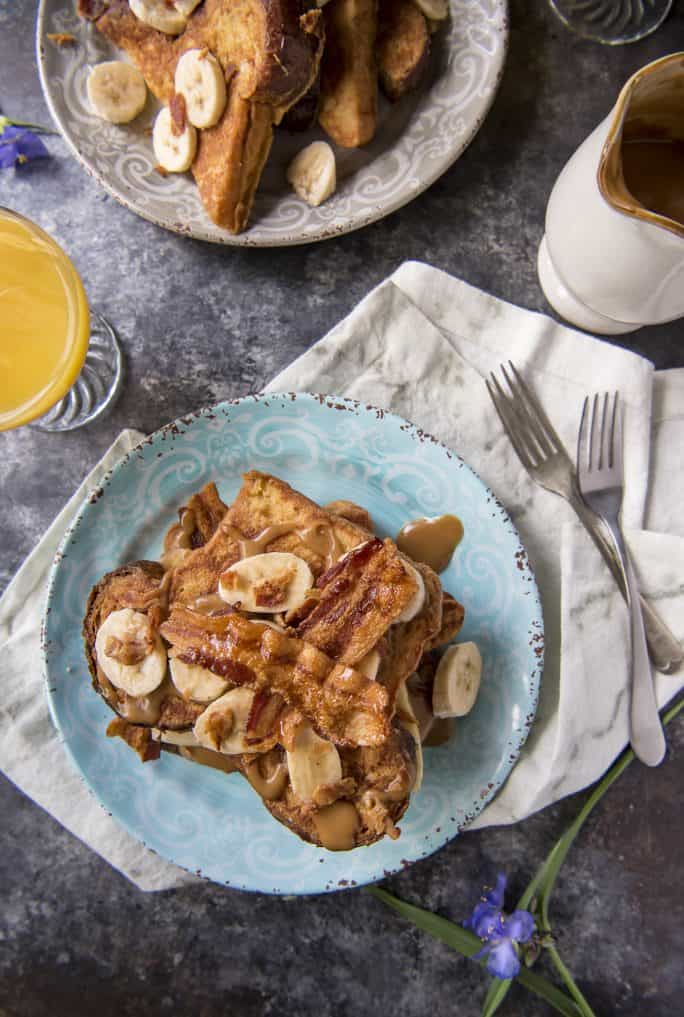 Other tips for improving your brioche French toast: 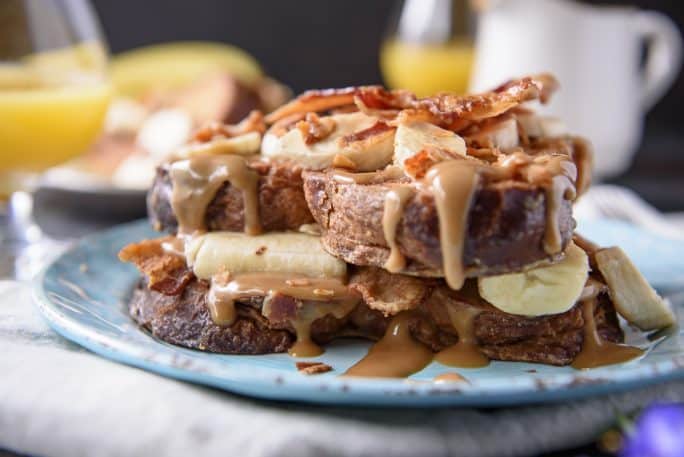 Got a sweet tooth in the morning? Here are some breakfast recipes you HAVE to try! 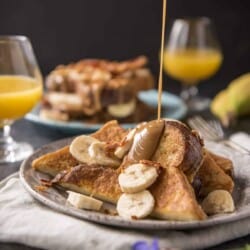 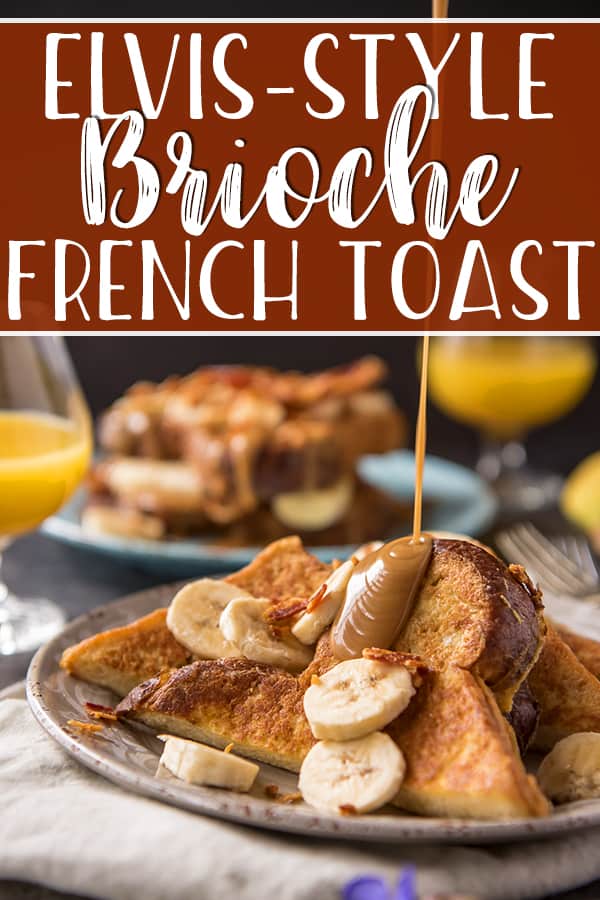