Having an all grown-up Halloween or fall-themed party this season? Jazz it up with a classic Irish trio in one of these Boozy Chocolate Bomb Cupcakes! Guys. These cupcakes are not for the kiddos.

Traditionally, Halloween is all about them, from the coolest superhero to the prettiest princess to the best candy haul (parent tax? I think so).

But these Boozy Chocolate Bomb Cupcakes? These are only for the grown-ups! You start with a dark chocolate Irish Stout cupcake.

Just hang with me a sec.

Because a wonderful, close friend of mine is getting married this Saturday, and I’ve been given the honor of being her cake creator.

Full. Creative. Control. She told me to just go wild.

That freedom, paired with what I know about what she and her hubby-to-be love, brought me to this. She’s a sucker for Guinness (just like me!), and she’s had her fair share of car bombs (though they didn’t all end well).

It would seem I made these for the wrong holiday. Roll with it.

These are good any time of the year. Why should Irish liquor only get one day to celebrate?!

Tell you what. Whiskey and caramel together are a pretty fantastic combination. (I won that cute little owl candle holder playing bridal bingo at her shower, by the way.)

Then, you top it all off with a fluffy Irish cream buttercream. With a wee bit (watch out for falling intentional puns) of cream cheese blended in.

Because all icing tastes better with cream cheese.

I have to say, I feel that this combination of liquors ultimately taste much better as a dessert.

Besides, I’ve personally never really been one for whiskey. 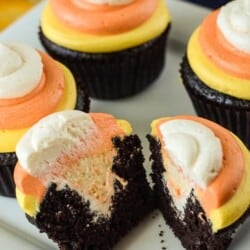 What is your favorite part of Halloween as an adult?