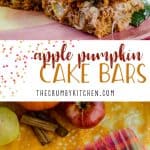 I told you last week, it was here to stay, at least for a few weeks. But I promise, I’ll try to mix it up.

For instance, these Apple Pumpkin Cake Bars; they have apples and pears inside the pumpkin.

You have to be prepared! The people, they want all the gourdy goodness!!

I’ve had some pretty wonderful pumpkin flavored treats throughout my life, from homemade to store bought; but this cake is really something special.

I had a hard time deciding what to call it, because, to be honest, it kind of turned out the way it did by accident. A string of them, actually.

My besties’s mom nailed it – it’s a dump cake.

I can’t stand that name. It sounds like something you clean out of a diaper.

Nothing against dump cakes! They’re delish; but this cake doesn’t LOOK like a dump cake.

It has so many components, I couldn’t fit them all in the name without ticking off Twitter and Google. And, if I’m being real, I’m not even sure I can call them bars, since you need a fork to eat them.

They’re seriously so moist, they practically fall apart when you try to pick them up.

I maybe should have par-baked the cake before I topped it with the apple-pear compote.

I maybe should have taken the advice I give in this recipe and cooled and strained the compote before dumping it on the cake. (I still recommend this – there was a LOT of juice left over.)

Then, I maybe would have gotten the end result I desired – of a lovely apple-pear-pumpkin-streusel bar you could eat with your hands.

But then, I maybe wouldn’t have ended up with the most incredibly moist, crumby fall cake I’ve ever tasted, much less made myself.

The denseness of the fruit, plus the buoyancy of the cake batter allowed the two components to come together so perfectly; some of the apples and pears sank partially into the batter, ensuring every bite contained an even mix of cake and fruit.

I admit, I had no problem eating this for breakfast.

And second-breakfast. And all those other meals.

I could have taken down the whole pan single-handedly, which is why I sent most of it home with my bestie.

I’ve had a lot of people ask me how I can work in a bakery, and then bake so much at home, and not weigh 1000 pounds.

For some people, self-control is key. For me, it’s guilt.

Sweets are my guilty pleasure, and I stop eating them when the guilt kicks in. Maybe reluctantly, but I stop.

And I go to the gym as often as possible (which is never enough).

But I could never forsake the good things in life. YOLO. Annoying, but true. 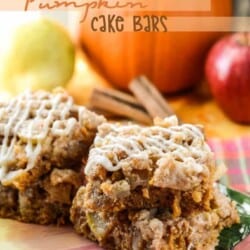