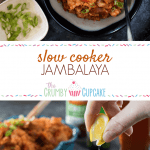 Mardi Gras isn’t complete without some Creole food, so throw this Slow Cooker Jambalaya on while you hit up a parade or bake some beignets! Andouille sausage, chicken, and shrimp marry with Cajun-spiced rice and vegetables in this easy weekday or weekend meal. Guess what?! I’m not French.

I’ve never even been to Louisiana, and I won’t claim to have any knowledge or experience cooking Creole food.

(I did take a stab at beignets that turned out pretty good, though.)

The Hubs made some jambalaya for Valentine’s Day at a suggestion from moi, and I knew I had to try my hand at it after his turned out more like paella. Blame me for running late coming home from work. It was delicious (and filled with gator meat!) but it was not the jambalaya I had been craving.

Let’s get this out of the way – we won’t pretend that this is a beautiful dish. It’s definitely not, at least not in the traditional sense – but once you get past the tomato-tinted hue of your bowl and dig in, you might just feel a bit Cajun yourself. It all starts with a beautiful mirepoix.

We won’t argue what kind of onions you should use – I’m partial to red ones (and we buy them in bulk so we always have them,) but if you’re a sweet yellow fan, or all you have on hand is white, it won’t really matter. I guess even shallots would work in a pinch, but that seems like such a waste. As far as peppers go, if you are stuck with only green ones, no worries. your dinner may not be as colorful, but it will taste just as delish. I rarely have red or yellow ones myself, except when I plan ahead or have a batch blog cooking day on the horizon.

Because I am the worst vegetable eater on the planet.

I love them so much, but after my (generally overzealous) purchases are made and are put away in the fridge, it’s like they fall into a black hole. I swear, the contents of my crisper drawer go to another dimension, and most of the time I don’t see the sweet veggies again until they’re just past their “Are you sure you wanna eat that?” stage. There just aren’t enough hours in the days I get to spend cooking to use everything up. I bought the most beautiful rainbow carrots a couple weeks ago at Whole Foods and all I really wanted to do was style them for an Instagram post, then eat them raw.

They’re currently sitting on top of my compost pile, shriveled and discolored. They found the doorway to the black hole.

Not only do I murder plants, I murder defenseless root vegetables. The humanity. So, in spite of trying to plan ahead and spend less by shopping fewer times a week, I end up coming home with at least a bag of groceries every day. Usually because I forgot something the day before.

3/4 of the ingredients in this recipe were bought the night before I cooked it. Thank you 10 pound bag of rice and frozen chicken breast – you have yet to fail me.

Oh, and the scallions. I propagated those from roots, so technically I had those, too. How about that? Something edible that I haven’t sent to a timely death! On an unrelated note, we are inching closer and closer to a few important events in my life – one of which involves you! I’ve teased a little bite about the BIG CHANGES coming to the blog, and I can hardly wait to reveal the big surprise next month!

Honestly, it’s killing me not to just come out and tell you, but it’s been something that’s been evolving since LAST January. Like 2016.

Oh, and my birthday is Wednesday. Ugh.

At least I’ll be spending it with some of my favorite Sunday Supper/blog people at a Cabot Cheese VIP event in Orlando! Remember the Idaho Potato event I attended last year, where we learned how to properly use a knife in the kitchen? It’s kind of like that, except this time we get to devour all the cheese with Lodge Cast Iron, Divine Chocolate, and the sweet folks at Florida Dairy.

Be sure to keep an eye on my Instagram Stories on Wednesday, March 1st to see all the fun! Maybe it is kind of a pretty dish after all. 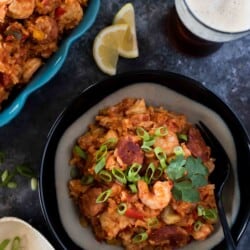 Let the Sunday Supper Tastemakers help you throw the best Mardi Gras party of your life! Check out all of these amazing recipes!