If I asked you to make a list of your favorite desserts, which of those things would be on it?

That’s pretty much my list right there. The only thing missing is cupcakes and apple crumb pie.

So, say that list is also similar to yours. If this cake were to turn up on your table for a holiday or a party or a random social gathering or Sunday dessert… you’d eat it, right? No questions asked.

If this sort of crazy, divine dessert is the thing of dreams for you; if this is the kind of cake you’d dive face-first into and feel no shame; if your eyes widened and your mouth dropped a little in audible awe when you saw this beauty pop up on your screen…

…then we are kindred spirits in sweets, and you’ll just love this thang! I was pretty proud of myself on this one, I must say. Considering the work (and half bottle of Cabernet) that went in to its fruition, I call it a major success.

Picture this. It’s the day before Easter, and you’ve been so busy at work, you realize you still haven’t figured out what to make for Sunday’s dessert – a dessert you traditionally bring to the not-so-traditional celebration you’re a part of every year.

You’re racking your brain, trying to come up with something grandiose and unique and crowd pleasing, and going back and forth between light and fruity for spring, or deep and rich just because you know everyone will love it. You spend the day fishing for opinions from your coworkers, and when you end up without a consensus, you’re left wandering around the jamming grocery store at 6pm, on your way home after a very long day, frustrated, tired, and still without any clue of what you’re going to make.

So you just start grabbing things. Ricotta and cream cheese, oranges and whipping cream, a box of lazy brownie mix and a bag of sugar, thinking that no matter which direction you decide to go, you’ll be sure to have everything you could possibly need.

Someone mentioned homemade cannolis, so you grab some shells from the bakery (because ain’t nobody got time for homemade shells) as you head to the checkout lanes, all fifteen of which are backed up at least five people deep.

You take a deep breath, pick the least offensive lane (slim pickins), and stare off in to the distance, inching forward with your hand cart full of miscellaneous goods. Still pondering. That was my Easter Saturday.

When I finally got home, I had made the decision that dessert would involve cheesecake, but I really wanted to involve that lazy box of brownie mix.

Enter my stream of consciousness:

Out comes the springform pan, in goes the brownie batter. In to the oven with you, all fudgey and happy and full of chunks of chocolate. (I may have licked the spoon.)

How about a glass of wine?

Cannolis. Alright. Next layer…cannoli cheesecake? Sub some of the cream cheese out for ricotta. Toss in some chocolate chips and orange zest? Why not.

Twenty-five minutes. Ding. Brownie out, cheesecake on top, another trip in the oven for a couple more hours.

Hmm. Another glass of wine.

After debating whether or not to press a layer of crushed cannoli shells on the top of the cheesecake (not – they would have lost their crunch from the fridge condensation), I felt like I could finally breathe. Except all I wanted to do was sleep…but I had to wait until the cheesecake reached room temperature to put it in the refrigerator.

So, I numbed my brain on Pinterest for a while. At last, 1am rolled around and I crawled in to bed, my half-made dessert wrapped up tight in the fridge.

And a short six hours later, my alarm woke me up to finish the job.

The little sleep I got did a lot for me, apparently, because I cranked out the rest of my vision in short order, with enough time to make my traditional Polish Easter breakfast before Mr. Crumby woke up at 10am.

Not too shabby for a dessert that I was clueless about twenty-four hours earlier. And believe me, there were many wide eyes and dropped jaws and ‘oohs’ and ‘aahs’ when I strutted in the house with that baby.

If you’re like me, a food adventurer, and marrying desserts is A-OK in your book, make this Chocolate Cannoli Cheesecake Mousse Torte. It may have been a half-baked idea at first, but the end result is abso-freaking-lutely delicious.

It’s rich, decadent, somehow still light and fluffy, and definitely a one slice per person dessert. Out of eight of us, only two couldn’t finish their slice (believe it or not, I was one of them), and we still had a good quarter of the cake left to put away.

It was so good, I (with the very vocal support of my dinner companions) decided to enter it in to a contest.

I’m attending the Food & Wine Conference in Orlando this July as a brand ambassador (which I’ll go in to more detail about later this week.) Dixie Crystals, one of the conference’s platinum sponsors, holds a dessert contest every year, and the theme for 2015 is chocolate desserts. A little update – So I DID submit this into the Dixie Crystals contest…and took third place!!
This baby is an award winner, y’all!!! 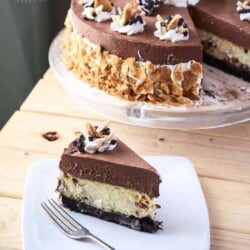 What is your favorite way to mash up desserts?