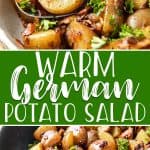 Tangy, tender, and loaded with bacon, this old fashioned Warm German Potato Salad is a fantastically easy addition to any summer meal! This hearty potato salad, tossed with a mustard, onion, and bacon vinaigrette, is a far cry from that mayo-loaded salad you’re used to! 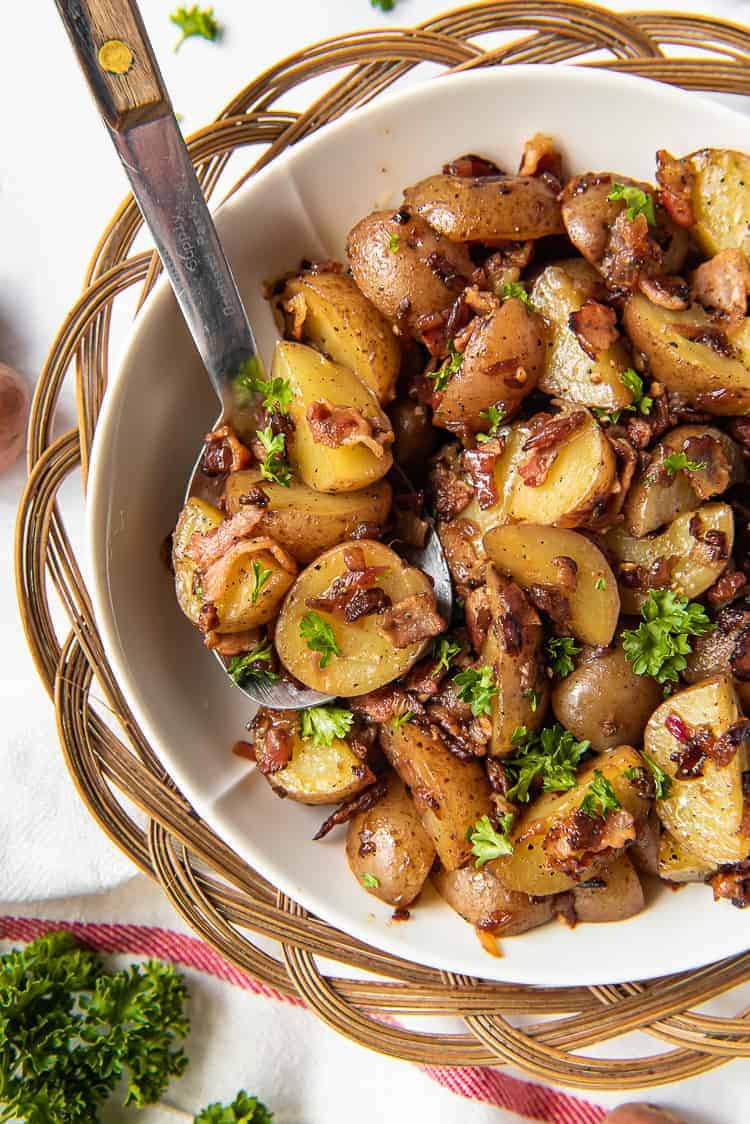 A wise man once said, “Bacon makes everything better.”

I don’t know who it was that said it, but I like to repeat it every time I cook up a batch.

Personally, I love all things potato, and I really don’t feel like they need help being delicious. And yet – bacon. Warm bacon vinaigrette just takes them to a whole new level.

JUST TAKE ME TO THE WARM GERMAN POTATO SALAD ALREADY!

If you’d rather skip my (pretty darn helpful) tips and tricks, essential cooking info, and similar recipe ideas – and get straight to this deliciously easy potato salad recipe, just scroll right on down to the bottom of the page where you can find the printable recipe card! 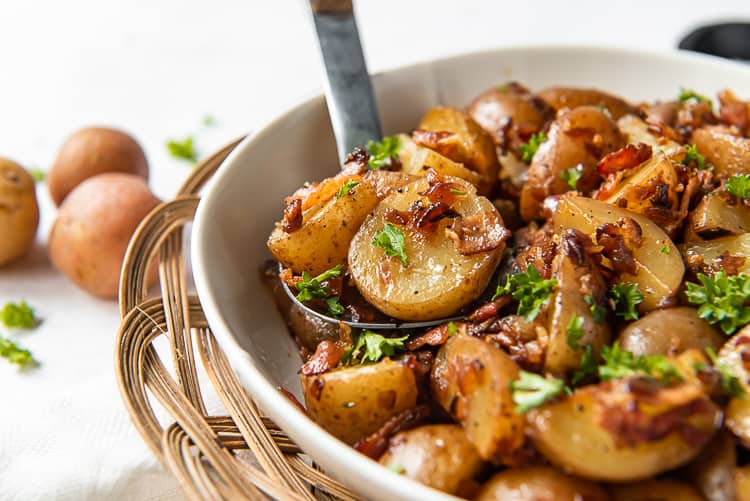 Remember how I announced that last week was supposed to be Summer Salad Week?

Wellllll. That’s didn’t happen. You may have noticed.

Real life got in the way (and by real life I mean my other job) and put me very far behind on getting ish done around here.

But the good news is that you get an extra salad recipe thanks to my slacking, since now THIS week is Summer Salad Week!

No hashtag necessary since it’s just me celebrating it. Although, maybe next year I can get some friends together to do it up right with me? What do you think?

Enough rambling, though. On to potatoes! 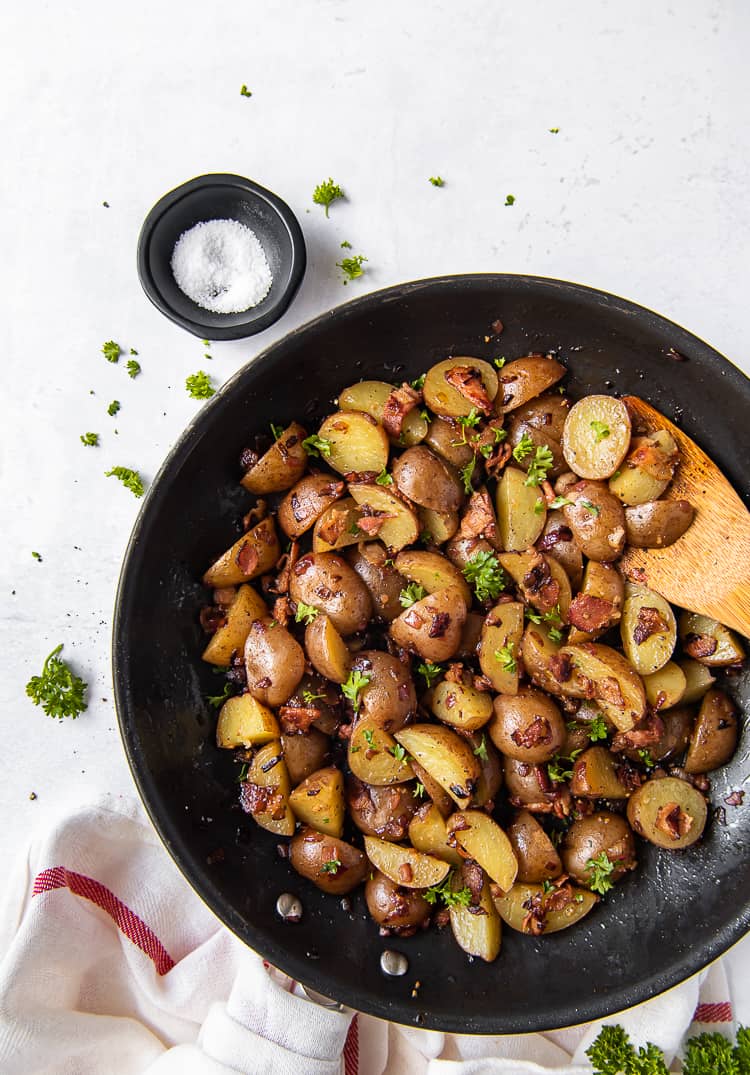 What Is German Potato Salad? How Is It Different From “The Regular Stuff”?

So! Before I get angry rants from angry Europeans, I will say that German potato salad can come in many different forms. Potato salad in general is believed to have originated in Germany, from which it spread throughout Europe and – eventually – to America during the nineteenth century.

The “Regular Stuff,” meaning American potato salad, is a mayonnaise-based cold salad. It usually involves chopped potatoes, herbs, other veggies, and sometimes boiled eggs, pickles, and mustard. These variations are similar to a common version served in Northern Germany.

This German-style potato salad, also known as kartoffelsalat, is a popular but uncommonly found version hailing from the Southern part of the country. It contains only a few simple ingredients, but packs a flavorful, savory punch:

While perhaps not authentic, this was Nana’s go-to side dish in the summer, since it’s quick, easy, and doesn’t involve too much work.

So, Is It Best Served Hot or Cold?

While the mayonnaise-based potato salads are best either cold or at room temperature, German Potato Salad is much better hot or warm!

A warm salad may seem like an odd side dish for hot summer months, but the tangy, bacon-loaded flavors are totally worth a few beads of sweat.

This side will also compliment any holiday meals, in place of baked or mashed potatoes. 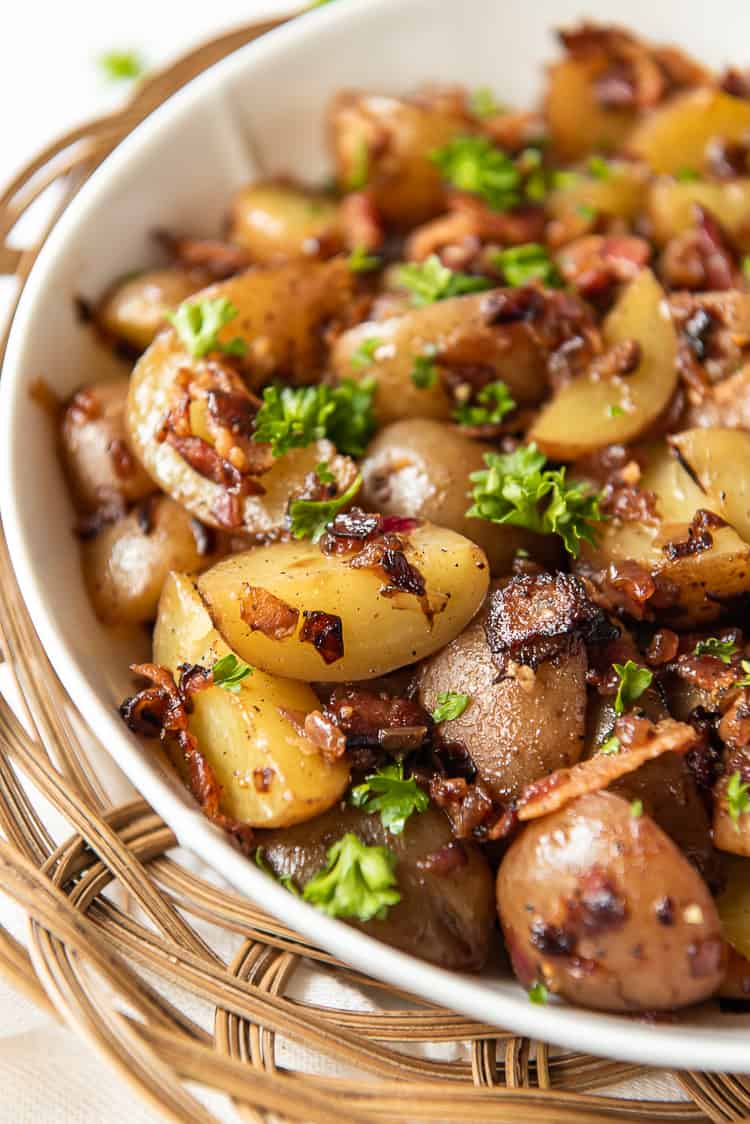 What Is The Best Type of Potato To Use for Potato Salad?

When it comes to potato salad, you have to be choosy about which spuds make the cut. Not every potato will make for a perfect salad, so shop wisely!

There are three types of potato:

Starchy potatoes are fluffy and low in moisture – meaning they fall apart easily after boiling. This makes them the best candidates for mashed potatoes, but not so much for a great salad.

Pick up a bag of Red Bliss or new (baby or creamer) potatoes when shopping for this recipe. If you can’t find any, Yukon Golds or standard white potatoes will also work – just cut them a bit smaller.

How To Make German Potato Salad

Just like any other potato salad recipe, you start with a bag of potatoes.

Wash them, cut them in half, plop them in a stockpot and cover them with water. Add in a little salt, then bring the water to a boil. Reduce the heat to a simmer and cook the potatoes until they’re just tender all the way through (poke ’em with a fork to test). It should take anywhere from 10 to 18 minutes.

Drain them, then put them back in the stockpot while you continue on with the best part – the bacon! 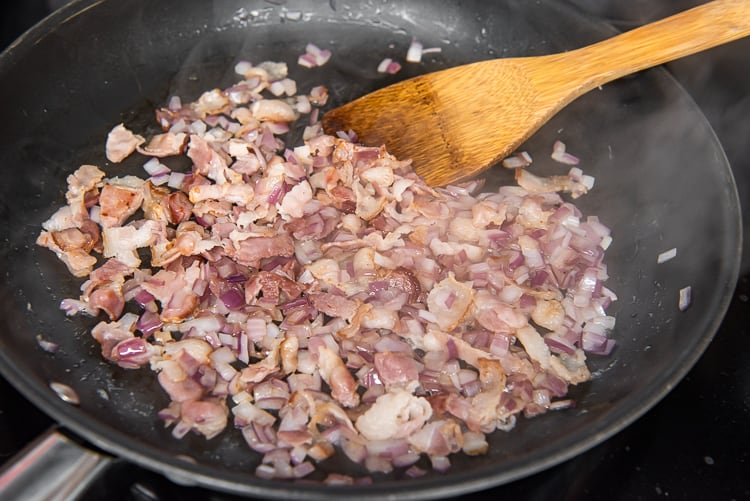 Now normally, I bake my bacon. It’s a personal preference, but I love the ease, the crunch, and the simple cleanup.

For this recipe, though, you’ve just gotta fry it the old fashioned way because you NEED THAT GREASE.

Begin by chopping up some bacon and tossing it in a cold non-stick skillet. Crank the heat up to medium and watch those little pieces dance and begin to render, then add in some onion. 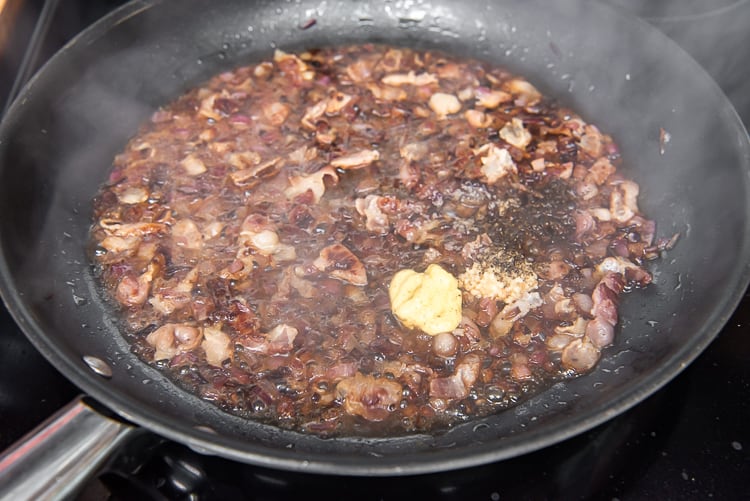 Sauté that up together until the onion is translucent and the bacon is brown.

Resist the urge to spoon some into your mouth.

Instead, whisk in the remaining ingredients – garlic, mustard, vinegar, sugar, salt, and pepper. Allow everything to simmer together for about 2 minutes, creating the most amazing vinaigrette of your life.

Take a deep breath, then grab those potatoes and add them to the pan. 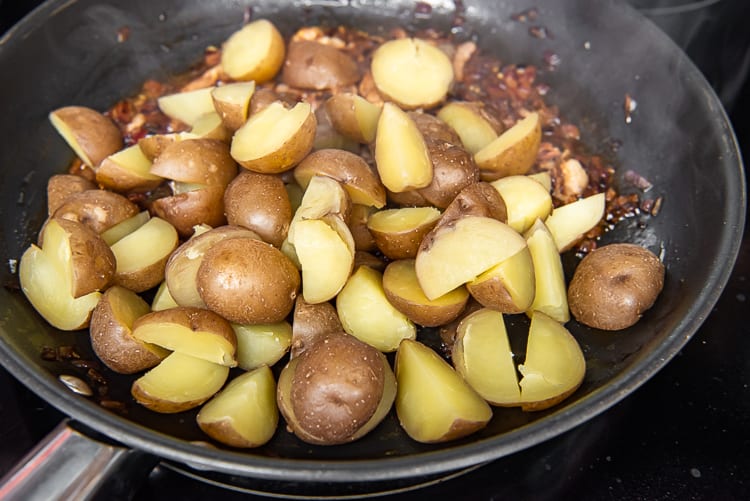 Toss the contents together and take a taste. Season it with more salt and pepper, if you’d like.

Some people love salt. My hubby is one of those people. Personally, I think the balance is perfect as is.

Now remove the salad from the heat, transfer it to a serving bowl, and give it a dusting of fresh parsley before letting the savages descend on it.

There probably won’t be any left, but if there is, it will stay fresh, covered, in your fridge for 3 to 4 days. Just warm it up again before polishing it off for lunch the next day. 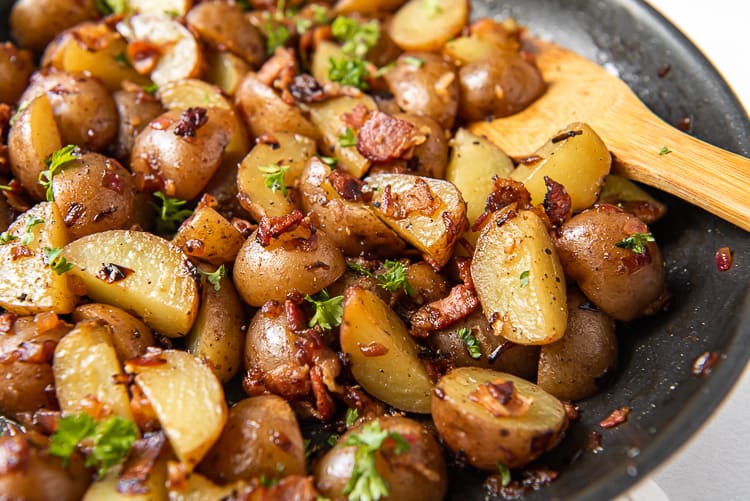 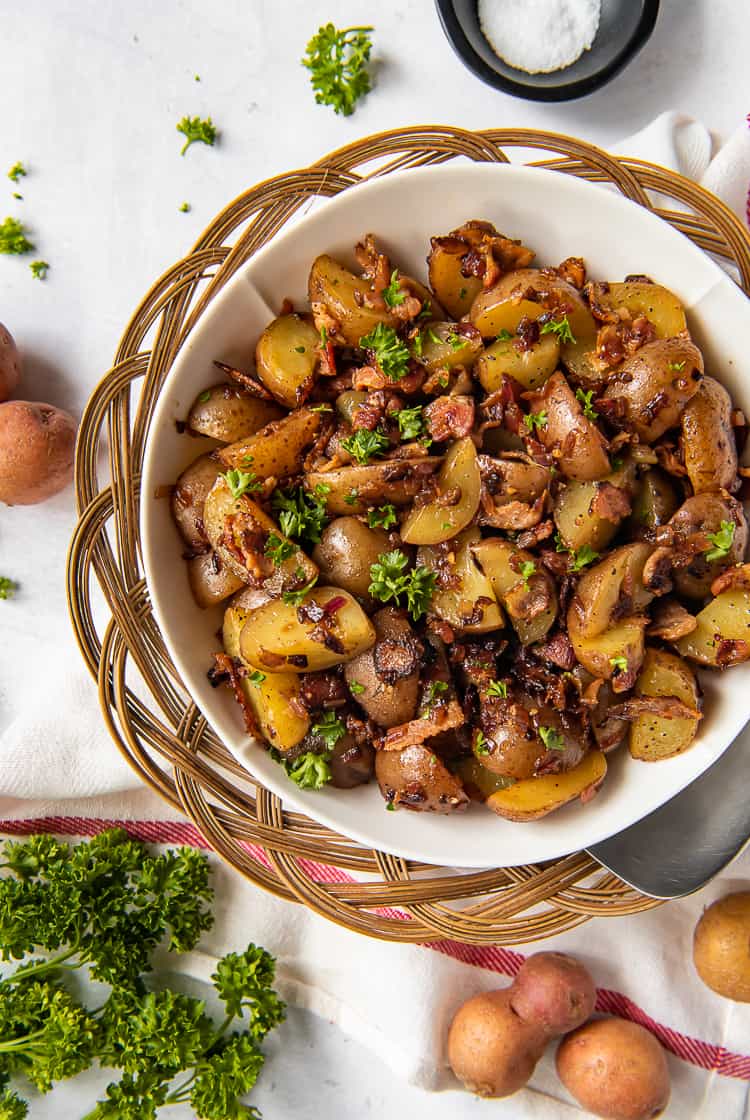 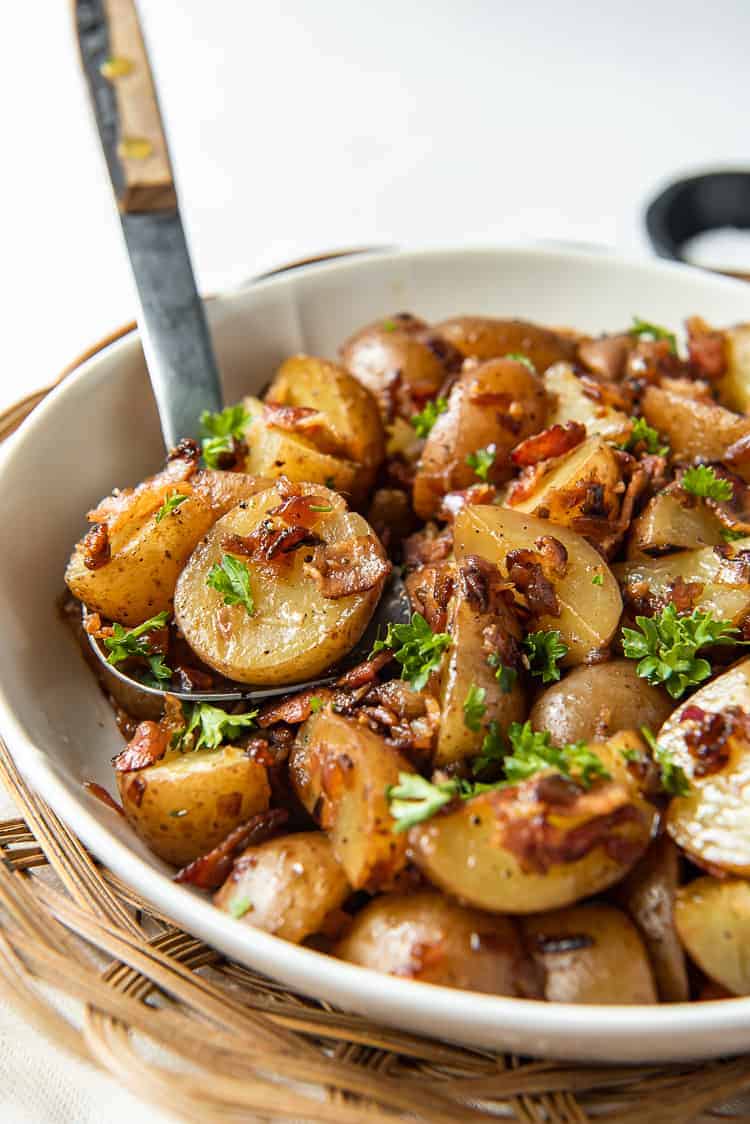 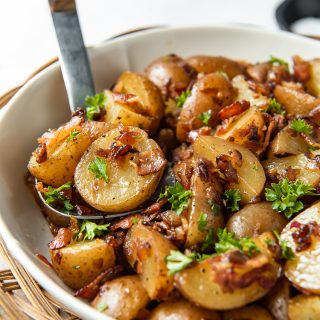